GolfDotz - Bringing Colour to the Game 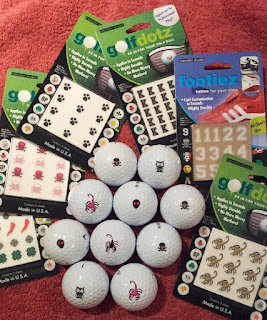 I love new things in golf. There are people who use a little imagination and come up with novel ideas that make you think: Wow, that's cool. Why didn't I think of that? Golfdotz is one such idea.
I blogged about the Golf Grip Raincoat not so long ago. Definitely an acquired taste as you're bound to get a bit of a slagging for whipping that out of the bag when the rain starts to fall...

... but GolfDotz is something so obvious and brilliant that you can't believe it's taken so long to arrive. Basically, they're transfers for your ball. Rather than drawing black/red/blue lines or dots or circles on your ball, you add a GolfDotz and your ball is instantly recognisable.

So, instead of standing on the 1st tee and announcing: "A number 2 Titleist ProVI with three red dots", now all you have to say is: "mine's the one with the scorpion on it! Anyone got a problem with that"

Golfdotz come in something like 100 different designs. You can stick on a scorpion, a national flag, your initials, an owl, skull and crossbones... it's a long list.

Not only does it identify your ball, it adds some colour and some fun too. Deciding where to face your Golfdotz when you're teeing it up is up to you. Personally, I'm waiting for a Donald Trump version so I can get the Driver at him.

Putting them on takes under 10 seconds. All it needs is a bit of finger pressure.

Golfdotz aren't designed to last - but they may well last longer than your ball when faced with thickets of gorse or acres of ponds, and it's all about adding some colour to the game and having fun.

You can buy them directly from Golfdotz or through Ireland's www.breakingpar.ie