A guest blog today... from a man who likes par threes almost as much as me. Here he picks two of his favourites, both of which just happen to make my top five.

I have on occasion been know to hit a wee white ball around about 180 acres of land.
It may be parkland, inland, linksland, all this land. Golf can become  a bit intimidating, but to the golfer in us it is “intoxicating”... I have had the pleasure of playing a few of the golf courses that are voted, by some, to be in the Top 100 in the world... Waterville, Co. Kerry being one, and Narin & Portnoo, Co.Donegal the other... admittedly Narin & Portnoo is not on any list I have come across BUT IT SHOULD BE. In fact, as a place, it should be in the Top 10, but that’s just me... you should check it out for yourself.

I have a liking for par threes and some I have played are striking to say the least. The 12th in Waterville, aka “Mass Hole”, is one such hole. History and beauty are the order of the day here. History for the Mass bit and beauty... well, because it’s a beauty.

Links golf strategy often employs low-trajectory, bump-and-run tactics to keep the ball out of the wind and close to the narrow, undulating fairways. Sometimes, though, the fairways aren’t there, and the layout requires one skilfully placed high trajectory shot from tee to green. So it is at Waterville’s par three 12th Mass Hole, which asks for spot-on accuracy across 160 – 200 yards of carry over a frightening hollow of no man’s land from elevated tee to elevated postage stamp green The history of the hole is that when the hole was first designed, the green was to be located in a large hollow, but the local people considered this piece of land to be sacred and the green was then relocated above the hollow where it now stands. There are no “bail out” areas of real note here, it’s GREEN or nothing and from what I can remember it’s index 18 on the card. It is in my humble opinion quite simply one of the best par threes on our land.. I have played it in flat calm weather: 6/7 iron off the middle tees; I have also played it in a howling gale with the rain coming in at a 45 degree angle, stinging the cheeks, and hit a 3 wood... SHORT. Simplicity and beauty rolled into one golf hole. This golf hole is MAJESTIC... FRIGHTENING... but most of all it’s FUN. 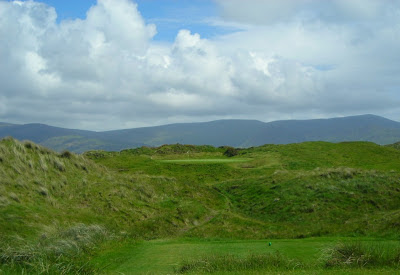 The next hole is the 7th at Narin & Portnoo Golf Club in Co.Donegal.  At 130 metres, it is a truly natural golf hole. The club has named it Dolmen.  It’s a beguiling hole but boy, is it deadly. You have to cross a piece of land which can only be described as The chasm-crossing. No bail out short, right, maybe a wee bail out area long and an even smaller area left of the green, mind you be no more than 2 yards off line here as anything more and the ball you WERE using will be given to the golfing gods and you WILL be re-loading. The most pleasing feature of this hole is that the grass on the green and the grass on the tee box are the only thing to see a mower in years... as natural as you can get. There is another par three on the course - the 16th - which I can wax lyrical about for hours, and also the par 5 15th. These are truly brilliant holes, but they are for another time, because this is about the best par threes I have played and, for starters, these two are simply the best. (There’s a song in that line somewhere.)

The 7th hole has been aced on more than one occasion, not by me I hasten to add. But I don’t think taking up to a 9 (notice I didn’t say the dreaded 10) on this hole would upset many people, well maybe it would, but you get where I am coming from. This hole really has to be played to be believed and appreciated. 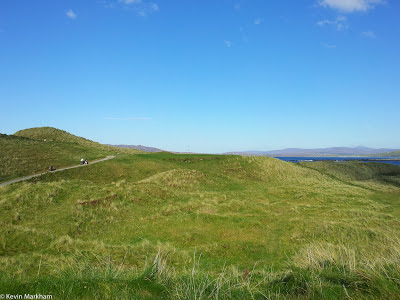 The 7th at Narin & Portnoo

Posted by Kevin Markham at 5:57 PM