It was a bright morning when I arrived at Powerscourt Golf Club a week ago to take photographs of the two courses. I’ve played the older East course several times, but the West course only once. 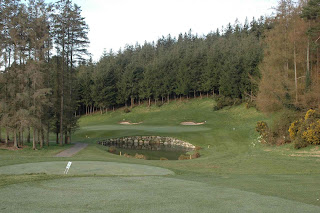 [Photo: the par three 16th of the East]
When the East course opened in 1996, it was lauded as one of the great new parkland tracks. Membership started at £IR 5,000, and this rose quickly as the club gained popularity.


The highest it got to – that I heard – was £50,000. It hosted the AIB Irish Seniors which seemed to rubber stamp its status, but I never found it to be that good. Wonderful greens, good quality, a great start (holes 2 to 5) and a great finish (16 to 18), but several weak holes in between let it down. 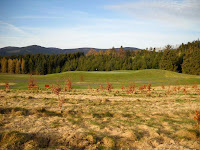 [Photo: the 11th green on the East (from the 15th fairway)]
Going back to take photos after a few years was an interesting reminder. I thought the same thing as I did back then – the course loses its way in the middle of the round and tries to make up for its shortcomings with mounding (which often frustrates me as it interferes with the natural land flow) and intricate green complexes (testing to say the least).
The West is seven years old and promises a lot more fun, with a challenging hillside to negotiate and views of Powerscourt house - a misnomer for sure. It took me a couple of hours to get around the whole place, and I soaked one pair of shoes and trousers, by traipsing through the dew-soaked rough to get from one fairway to the next. Fortunately I had a second pair of each, as I was playing at Greystones at 10.30. 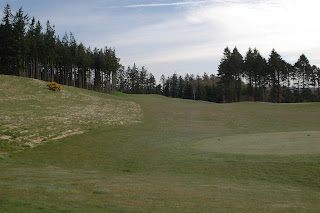 [Photo: Par four 15th on the West, across the top of the course]

You’ll find photos of East and West courses on Flickr.
Posted by Kevin Markham at 9:17 PM