Kilternan Hotel. What happened next? 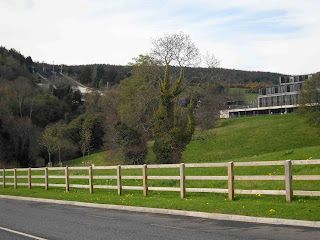 
Kilternan Hotel, with its dry ski slope and 'need-one-leg-longer-than-the-other' golf course, was a place I knew well growing up. I learned to ski here and swam in the pool, but never played the mountainside golf course which, legend has it, was a bit of a joke.

Then the Celtic Tiger kicked in and Hugh O'Regan bought the place and started advancing his big plans. The hotel would be expanded massively, the golf course would be revamped and there would be a theatre and business facilities. It was a big project and required large volumes of money, eagerly supplied by Ireland's 'leading' financial institutions.

I tried to get to see the place during my travels in 2008, to assess if the golf course could be included in Hooked, but I never got a reply and the gates were permanently shut. Evidently the golf club members weren't getting much joy either as they gave up on the development as far back as 2007, with many joining South County instead.

Time passed, the Celtic Tiger collapsed and property developers found themselves in a deep, dark hole. O'Regan found himself in one such hole, with Kilternan Hotel falling on top of him. That was in 2009.

Today, two US firms are interested in buying up this stalled project, for about one sixth of the value in loans handed out by - guess who? - Irish Nationwide. Yep, the building society who put the property in receivership last year are contemplating offers of between €30m and €50m. The place is almost complete - although any Irish house buyer will tell you that means precious little - and who knows what the future might hold, but I'll say this: the architect behind the development should reconsider his career choice. 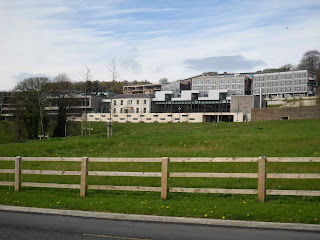 [Photo: the mish-mash of buildings that might make this the ugliest development ever envisioned. The grass on the other side of the fence used to be a golf hole.]

The hotel and surrounding structures are a complete joke. Seriously. There's the original Georgian building in the middle, which has sprouted arms and new heads - think Transformers - and it looks like some architectural monster has just vomited its lunch.

€30m might feel like a steal, but there's a lot of nasty stuff to clear up first.
Posted by Kevin Markham at 2:17 PM