[Photo: the approach to the 18th at Kilkea Castle]

If you do, you could be the proud owner of a golf course and clubhouse. And 33 lodges. And a 12th century castle with a 4 star hotel.

Kilkea Castle in Co. Kildare is up for sale. It’s an hour from Dublin Airport so perhaps a major Irish developer might be interested in a personal playground. Oh yes, I forgot, there aren’t any major developers left. How about a multi-billionaire from Dubai? Nope, none of those either. An Irish bank? Umm, no! Bill Gates? I don’t think he plays golf. 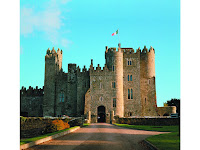 [Photo: Kilkea Castle. Pic © Lisney]
If you fancy making an offer...Who does that leave who has a spare €16m? I know – the Lotto winner from last Wednesday who picked up over €16m. And he can offer cash.
Kilkea Castle GC is a par 70, standard parkland track, with some pretty par threes and the River Griese gliding through the middle. The castle is one of the largest in Ireland still to be inhabited, and the 18th green sits right under the walls. There’s a ghost that wanders the halls (what self-respecting castle doesn’t have a ghost nowadays!) and there are 36 en-suite bedrooms.
Lisney Advertisement
[Photo: the par three 16th over the River Griese]

Posted by Kevin Markham at 6:46 PM