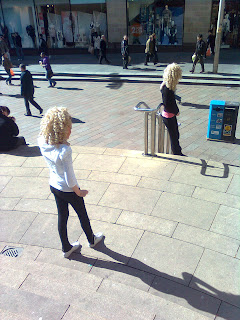 I spent the day in Glasgow on Thursday. Sadly it wasn’t for golf because the weather was glorious and Troon isn’t far away. I was on business, but I had a few hours to kill so I walked around the centre of the city. There was some fancy dress thing on. Little girls were running around, caked in make-up and with those huge piles of curls glued to their heads. It made them look top heavy and in the winds blowing down the streets I swear some of them almost toppled over. I walked up towards the Glasgow Royal Concert Hall at the top of Buchanan Street and it all became clear. It was the World Irish Dancing Championships - Oireachtas Rince na Cruinne. A big banner spanned the doorways and there were little female leprechauns kicking up a storm inside. The noise was deadly and those girls could do some serious damage with those bullet stomping feet. Glasgow was a bit overwhelmed judging by the reactions of passers-by.

There was a bunch of proud mammies taking their girls home on the return flight and I sat beside three of them. They were discussing performances and the judging and why their precious child hadn’t won. It was the Americans, apparently. There are too many of them in these competitions (this was the 40th Championships) and they don’t do it right (not traditional enough). 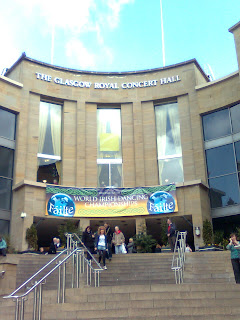 Here are some snippets, written down by me with – I admit – a bit too much relish:

“Did you see that one? She was wearing green on one side and leopard spots on the other. And her dress wasn’t straight. She looked like a hay barn.”

“I couldn’t believe it. Did you see how short her skirt was! You could see her knees, and the judges didn’t deduct points. It was disgraceful.”

“Una was doing brilliantly. She was far better than all the rest and she had first prize in the bag. I think she lost it when she fell off the back of the stage.” Yep, that’ll do it.

On a golfing theme: the Scottish golf magazine Bunkered has a 10 page interview with Donald Trump about his controversial Aberdeenshire golf course – he hopes to host the British Open one day… It ain’t built yet Don! Here's the website piece

I got the window seat in row 6 on the flight home, with amazing views of the snow covered mountains that surround Glasgow. And a great view over Portmarnock Links on the approach to Dublin Airport. 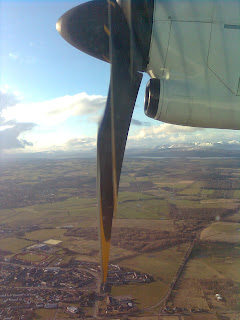 One piece of advice: if you fly on Aer Arann Twin Prop planes, avoid seat row 6. The blades are all of two feet outside the window and they look lethal. I know, I know, if the blades fall off mid-flight and rip through the plane’s shell we’re all going to die anyway, but I’d just like to spend those last few moments plummeting to earth with my legs attached.