The biennial Top 100 Irish Golf Course rankings by Golf World have just been released. Golf World is a UK magazine and as well as producing a GB & Ireland Top 100 ranking, they also produce individual rankings for England, Scotland, Wales and Ireland.

The ranking criteria have evolved over the years, as have the panellists, their number and their areas of expertise. It is very easy to have a panel heavily weighted with professional golfers, golf course architects, golf writers and those working in golf itself (general
managers etc.)… rankings calling on the knowledge of these experts have a lot to be said for them – not least an intimate knowledge of how golf courses work and how good a challenge they are. 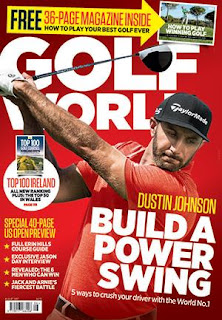 That said, the flip side of the coin has its merits, too. The majority of golfers are amateurs and therefore the opinions of other amateurs are hugely attractive. The Golf World panel, under the guiding hand of Chris Bertram (the Top 100 Editor), comprises eight amateur Irish golfers who have played widely across Ireland. Their knowledge comes from a very different point of view, especially as they cover all handicap ranges and ages.
Each course is rated against six new criteria:


It’s a strong combination of elements.

Things have moved on from two years ago when I was heavily involved in the ranking. These new criteria give a much stronger structure to the ranking and may well explain why there are such big movers in the list. It should also be noted that of the eight panellists, only three took part in the 2015 ranking.

The magazine is on the shelves now – DJ is on the front cover – and in addition to the full 100 ranking you’ll find Ronan Rafferty’s ‘Dream 18’ holes, Martin Ebert’s thoughts on the recent changes to the Annesley Links at Royal County Down (which he did), a column on Royal Portrush by Padraig Harrington, and one by Darren Clarke on Royal County Down, a Q&A with golf architect Ron Kirby, and commentary on the new Doonbeg, by Chris Bertram, and on Lahinch, by Tom Doak – one of the most revered architects in the game today.
After you’ve digested all of those you can get stuck into the top 100!

As a taster… here are just five of the big movers:


Overall, there’s a lot of movement in the ranking – including in the top 10, where five courses have changed position. Pick up a copy of Golf World today and decide for yourself which movers you agree with... and which you don't!

The magazine also includes a 40 page US Open review.

Posted by Kevin Markham at 6:22 PM