Carton House - Monty Mashes It Up 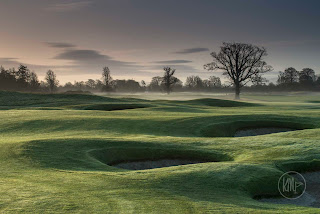 When I wrote an article on Carton House for Irish Golfer Magazine a couple of months ago, I stated that the Montgomerie was a seriously tough course… one of the top ten most challenging courses in the country, in my opinion.

At the time, I had played it on my own and scored well… if unofficially... and I left feeling pleased with myself and not a little bit relieved. I love the course but you come in knowing you're taking on a heavyweight.

Yesterday was the Carton House Media Day, and the Montgomerie was all set to flex
its muscles. After two gentle years playing the O'Meara, we were being thrown to the wolves: the Monty is an entirely different proposition. One resort, two golf courses and utterly different experiences.
Carton House is big, extravagant, luxurious and the sort of place where once you check in you won’t ever want to leave. It’s stretched over 1,100 acres, with nature trails, cycle tracks and fishing on the River Rye. It even encompasses two different counties. Who wouldn’t want to spend some ‘downtime’ here?

We played off the white tees (6,821 yards), with a 1 to 2 club wind and the flag positions in what could only be described as final day championship positions. Plenty of the course’s 127 bunkers are tucked in tightly to the greens… and if one happens to front the green then the flag was invariably behind it. The course’s signature hole is the par three 17th and it was the ‘Nearest-The-Pin’ hole yesterday. Take a look at the photo below (taken in March) and move that flag to the right, directly behind the bunker. That’s what we faced yesterday. Dermot, one of my playing partners, finished 30 feet from the hole… and he ended up winning Nearest-The-Pin. It was not a day to be firing at flags.
It was, instead, a day to be taught a lesson in humility: out of some 40 golfers only three breached the 30 point mark. It didn’t help that rain began to fall on the back nine but the Monty was set up like the strict headmistress who weeds out your every fault and then makes you stand up in front of the class to confess to each and every one.
Just because you're not in a bunker...

If ever an Irish course required strategic restraint and intelligence, this is it. You need to play smart golf from start to finish… and avoid the deep bunkers. Please, please, please, avoid the bunkers. If you drop into one then the chances are that you’ll only find another one waiting. You know what course management means and this is the course on which to exercise it. Do that and you will gain a lot of enjoyment out of your round; but simply ‘going for it’ will ensure you play enough bunker shots to qualify Carton House as a beach holiday.
Still, I enjoyed my round immensely and my passion for the course has not dimmed and the greens are – as ever – brilliant. I’ve said in the past that they are among the best greens I have ever played on and my opinion has not changed.

The day was superbly organised by the resort and Frankie Francis (of FBF Communications) and while the evening barbecue was forced indoors – rain will do that – it made no difference… in fact, we got to see considerably more of the 18th century mansion and what is on offer here.

Family Affair
On a separate note, when was the last time you headed out on the course after work, on a summer’s evening to play holes bathed in golden sunlight? I’m not talking about playing 18 holes (although you’re welcome to)… I’m talking about getting out there to relax, have some fun and enjoy the company of family and friends. Maybe you’ll squeeze in six holes, or nine, or just head to the chipping green for some practice and friendly competition.
Approach to the par four 9th

Carton House has decided to embrace those evenings this summer and will be hosting six weeks of ‘Evening Golf’ events in June and July, either side of the longest day. There will be a specific timetable of events – playing over the opening holes of the Monty course – but the goal is to make golf fun and enjoyable again by arranging golf for families, teams, low handicappers, high handicappers and everyone in between. Many of us play golf once a week, at weekends, and in a competitive format… Carton House will be offering something rather different.

It’s an opportunity to experience golf in exceptional surroundings for a fraction of the usual green fee (€10 adult, €5 child). Contact Carton House on 01 651 7721 to find out what’s on and when.

Posted by Kevin Markham at 8:28 PM