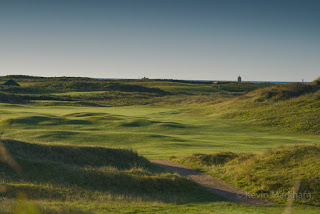 A couple of weeks ago, County Louth launched their official 125th anniversary celebrations. A week long string of events started with a four person team event. It was beautiful day, a well managed occasion and a lot of fun. And yes, I was fortunate to be one of the invited guests, playing with two members (Michael and Emer) and Ron Smartt, from Travelling the Fairways. That's Ron, below, demonstrating how to play the
perfect bunker shot.

The links terrain at County Louth Golf Club is much admired and envied. The low, rolling dunes at Baltray were first discovered by George Pentland and a Scot, Thomas Gilroy, in 1892. One of the more entertaining details from the course’s earliest design is that the holes were laid out by Gilroy and a Scottish professional by the name of Snowball. On such sweet links land, the club flourished, but the greatest moment in the club’s history came in 1938, when the redesign work by Tom Simpson and his associate, Molly Gourlay, was completed. Little has changed since then, emphasising how a classic design remains exactly that… a classic. The famous Jimmy Bruen opened the course that year and Co. Louth has gone from strength to strength... no doubt in part to two astoundingly talented ladies, Clarrie Reddan and Philomena Garvey, who dominated golf from the 1930s to the 1950s.
Some alterations took place in more recent times (Tom Mackenzie in 2003), but Simpson’s hallmarks remain. The greens and green complexes on this stretch of coastline are some of the best you will play, anywhere, and the natural landscape has been used to perfection.

Co Louth began hosting the East of Ireland Championship in 1941. The first event was won by none other than Joe Carr, who went on to win it another 11 times. His final victory came in 1969. The following year his son, Roddy, claimed the title. The 2017 edition of the event saw a certain amount of change as all 132 competitors played 54 holes of qualifying. Monday then saw the top 42 (and ties) playing the final round.
The course has hosted two Irish Opens: 2004 (won by Brett Rumford) and 2009 (when Shane Lowry beat Robert Rock in a thrilling rain-soaked play-off).

The club continues to make changes. The young Danish architect, Philip Spogard, has been tweaking the course in recent years (bunkering and greens) and a sparkling new short game practice area will open shortly. Located close to the club’s entrance, the three greens and carefully shaped landscaping will give golfers a great feel for what awaits on the course. It also adds a professional touch more befitting a course of Co. Louth’s reputation.

A special calendar has been produced for the 125th anniversary, with each month’s photo showing a different decade from the last 125 years. It’s a clever touch and while the calendar is for members, who knows what might happen if you ask nicely! We were fortunate to receive a copy in the goodie bags handed out before our round.

If you can get on the timesheet for the Open Week then I recommend you do so. This is quality Irish links and if you want to read my review of the course - for Irish Golfer Magazine - click here. 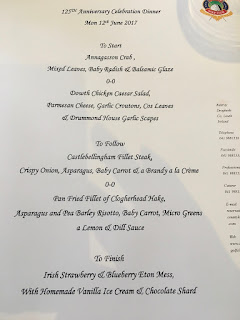 We had a cracking dinner afterwards, reinforcing Co Louth's excellent catering reputation. As for the golf and the opening day of the anniversary celebrations it seemed only fitting that there was a hole-in-one on the 5th. Considering the pin position, that was some feat.

Congratulations to the club on the anniversary and many thanks for the invitation. A pleasure, as always, to play the course. Photos of County Louth Golf Club.

There are six clubs celebrating 125 years in 2017, and they will be added here in the days/weeks ahead.