The Irish Open... Win Tickets with Your Memories

It's that time of year in Irish Golf, when we get to watch many of Europe's best golfers - and the odd American - compete on our shores. The Irish Open may have had its financial struggles in recent years, but it has made the cut... and so it should. It is a showcase for our country and our golfers, and while the weather doesn't always play ball, there is plenty to enjoy. Did the weather matter one bit as we watched Shane Lowry defeat the rain and Robert Rock to collect the trophy in 2009? No, and it's still a buzz to think that we have four Irish golfers who are Major champions. Seeing these guys in person and up close may be all it takes to bring young kids into the fold.


It worked for me.

I was eight years old when I visited Portmarnock in 1976. I had been to my first Irish Open the year before, at Woodbrook, and I had pestered my dad all year to take me to the next one. He did (and some others besides), and that's where a certain Seve Ballesteros became my idol. I'd like to say it was unforgettable - and the moment itself was - but for years I swore it took place at Woodbrook in 1975... only Seve never played there. It makes me feel like a bit of an idiot since this inaccuracy is in my book, 'Hooked'. Never mind, I was only eight.

Back in those days, the 'ropes' that separated players from the fans were basic affairs - and Seve was never the most accurate driver of the ball. I was standing at the front of a crowd when there was a great shout and a ball landed in the rough, 10 feet away from me. Back in those days (yes, again), there wasn't that mad dash to surround the ball as if it might escape, as if the crowd objected to the golfer getting anywhere near his/her ball... everyone just waited calmly for the Pro to arrive to play his shot.

And the Pro was Seve. With his swashbuckling good lucks, a smile that could sell toothpaste by the gallon, and a laissez-faire attitude that has long since vanished from the game, he sauntered across and flashed me that smile. Then he was playing the type of shot out of deep grass that made him a god to boys like me. So, so easy. In my 40 years of playing golf I have never managed a single shot that comes close to that.

Take a few moments, sit back and relive your own memories with this 'Greening In The Years' VIDEO by Golf Ireland. If the soundtrack doesn't bring out a few goosebumps, then some of the moments surely will. 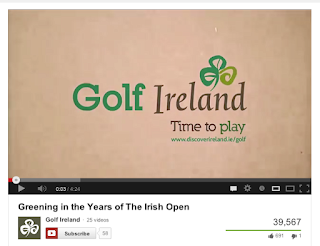 Maybe it will inspire you to take your son/daughter to A great festival of Irish Golf ... or take your dad and repay him for the times he took you. Or just go along, enjoy some great golf and start creating some new memories.

And if you want to win four day tickets to this year's Irish Open at Carton House, you better watch the video and find the answers to the following questions:

Q1. In what years did Seve win back-to-back Irish Opens?
Q2. What colour trousers was Sam Torrance wearing on the final day, when he won in 1981?
Q3. In 1990, which two players did Olazabal beat by three shots?
And finally
Q4. Who is the Touring Pro for Carton House?

Leave your answers in the Comment box below - they won't be published. All correct answers will be entered into a draw with the winner announced here on the blog on Wednesday 12th June at 8pm.

If you want to know how to get there, click here.

Posted by Kevin Markham at 9:37 AM