The Magic of Martinhal – Day 1

A 3.30am start might sound a bit brutal, but as the plane came in to land at Faro a few hours later, the shadows sliding off the wing like sheets off a statue, any thoughts of tiredness vanished.  Beneath us, Portugal’s Ria Formosa Nature Reserve ran for miles, separating land from sea. Its 17,000 hectares is home to hundreds of species of birds and it ends just before the wheels touch down. It was an inspiring welcome to a country I hadn’t visited in almost 20 years.

I was a guest of Martinhal Beach Resort and Hotel, invited on a media trip by Dermot Synnott at Destination Golf, and playing golf at the oldest and one of the newest courses in the Algarve. It doesn’t get much better than that…

The drive west took less than 90 minutes, across an easy highway that rolled past white houses and through stretches of red earth and orange groves.

I have never had the pleasure of five star luxury, but there is something glorious about Martinhal that goes beyond the garland of ‘five star’. It is effortless, relaxed and charming… not fussy, exact or formal.

[Photo: a panorama of the views from the hotel reception]

A Setting to Impress

And it got off to an impressive start as we pulled up to the hotel. Stepping out of the taxi revealed sun drenched views of beach, islands and a sea layered in blues and greens. There were six of us and we all stopped to look. The hotel rests on a slope above these views and one of the resort’s five swimming pools. It is all tucked away in the Costa Vincentina nature reserve on the Algarve’s most south-westerly tip. This is a quiet, unspoilt corner of the world, reflected by the peaceful village of Sagres which sits bright and white on the distant headland - its houses scattered like sugar cubes across the cliff tops.

The hotel has been designed and built to be sympathetic to its environment: it is only two storeys high. Local materials were used and this shines through in the easy style that falls underfoot and rises overhead. Chandeliers, straw lamps, cork tables and timber floors, it all breathes life into the delight of this place. 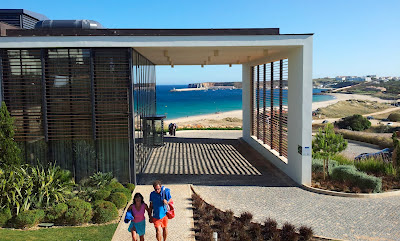 [Photo: the drop off area outside the hotel reception]

Our bags and golf clubs were whisked away and we were taken for a welcome drink on the long balcony of the O Terraco restaurant, on the first floor of the hotel. We leaned against the balcony and took our time drinking in the views. Below us the swimming pool was a source of laughter and joy as children and their parents enjoyed the cool waters. It emphasised the resort’s true audience.

We were six golfing journalists but Martinhal is a family-focused resort, well away from the ‘golf coast’ that proves so irresistible to Irish and British golfers. That’s not to say you can’t play golf – indeed, the resort has preferential rates with local clubs – but this is an opportunity to relax, have fun and keep the whole family happy. 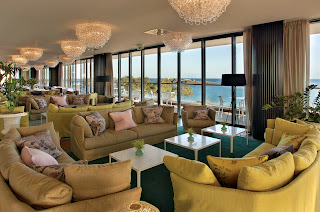 [Photo: the Lounge of the O Terraco restaurant and bar]

David, from Reception, escorted us to our rooms and showed us how things worked. The Bose iPhone/Pod station, the air conditioning and the safe… sadly, he didn’t show me how the showers worked. Yes, plural. There are three showers – two in the walk-in shower and one over the bath. It mattered little. Despite having a good education, and regarding myself as being reasonably intelligent, I could not get them to work… I ended up seeking help and discovered I should have been pushing buttons, not pulling them. I did, however, discover that the emergency cord – conveniently placed next to the shower controls – worked perfectly. I thought it might be the on-off cord, but some banging on the door and cries of concern moments later indicated that it wasn’t. 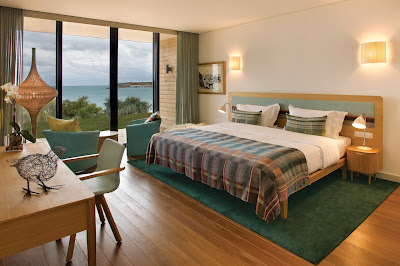 [Photo: Perfect comfort in the bedrooms]

The rooms were perfect, both in their understated style and their comfort. Muted greens and greys exuded a cool chic, and the bed was about seven feet wide. Families of four can rent these rooms with a spare bed/cot… but there is little need with a bed that size.

The best part of the room – apart from the bed and the Bose thingy – is the window. Including the glass door, it’s as wide and as tall as the room, opening up perfect views of the ocean and islands, and demanding breakfast on the small, private terrace outside.

And if you’re thinking that I was given a particularly good room, it was no better or worse than the other 37 rooms. What’s more, most of them (including mine) sit in units of four just beyond the hotel itself. Take a look at the photograph – it adds privacy as well as novelty. 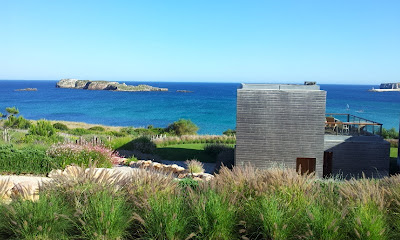 [Photo: view from the bedroom - the islands are part of the nature reserve]

A Taste of the Sea

A lunch at the resort’s second restaurant, As Dunas, followed. Fish caught locally was cooked with Portuguese flair and served al fresco on the terrace. Turbot, sea bass, bream, golden calamari. We sat under parasols on the terrace, out of the midday sun. All of us, that is, apart from Brian who chose a seat at the end. The sun practically gravitated towards him and he basked in the 27 degree heat.

Then came the tour. We were driven around in golf carts and shown the different types of houses that guests can rent – from one to three bedrooms. There are some with private pools and gardens, some with balconies on either side to catch the morning and evening light, and all of them with clean, elegant lines and comfortable décor. They’re even installing solar panels (tube and photovoltaic) to help turn the place carbon neutral. 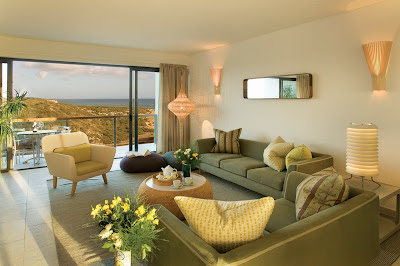 [Photo: The lounge (and views) of one of Martinhal's houses]

With the tour done we were deposited at Club 98 at the far end of the resort, where many of the sports activities (non-sea related) are based. Mountain-biking was yet to come, but for that afternoon’s entertainment it was Padel tennis – it’s a cross between squash and tennis, with glass walls at the end and along the sides. It’s a thoroughly entertaining sport but the rules will keep you confused. Vasco, our ever-enthusiastic instructor, kept explaining them – and joining in – but we mostly made them up as we went along. 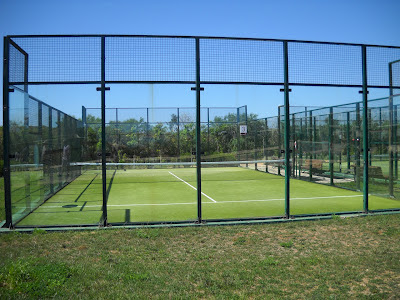 [Photo: this is what a Padel tennis court looks like]

There was little time for a shower (especially as most of it was spent trying to figure out how to work the controls) before we were expected at the resort’s Finisterra Spa. On the way, I walked along landscaped pathways lined with lush grasses and cork and olive trees, and decided that the resort was empty. It wasn’t – it’s just that it is spacious enough and there’s so much to do that people simply seem to disappear. 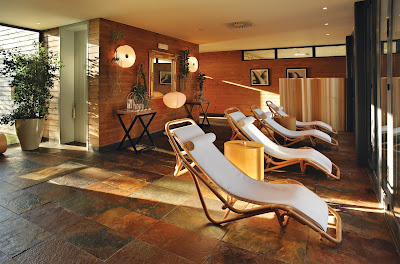 [Photo: The chill-out area in the Spa, where you can relax/snooze/snore after your treatment]

I pretty much disappeared as well, when Christina got her hands on me at the spa.

20 minutes of bliss later, her fingers having worked their way deep into my shoulders and back, I was floating on the moons of tranquillity… or snoring, as most people call it. There are six treatment rooms and in each of them an Irishman was lying face down, wallowing in contentment.

Portuguese - Through and Through
The day finished in the O Terraco restaurant where we had been earlier that day. I was presented with a bottle of Sagres beer (named after the local village) and a couple of us stood on the terrace as the sun set over the headland. Dinner was served shortly afterwards, and we were treated to the chef’s six course tasting menu. Each dish came with a recommended wine, which was wasted on me as I don’t drink the stuff, but the Sagres beer was a perfect accompaniment as far as I was concerned – whether it was salad, fish or duck. The food was superb and served in portions that always left you wanting more.
The resort is proud of its roots, from the materials and timber used in construction, right through to the cork tables and the remarkable straw lamps in the bedrooms, which are some five feet tall. So it is no surprise that the wine list is exclusively Portuguese (bar a champagne or two for those who wish to indulge.

It was a long and enjoyable night and 22 hours after getting up, I discovered that not only was it the biggest bed I’d ever slept in, it was almost the most comfortable. 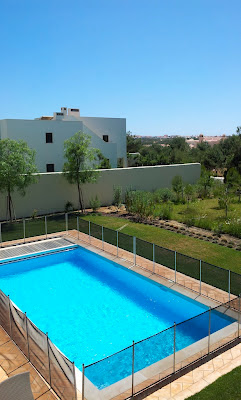 [Photo: private pool and garden at one of the houses]


Click on the links to read about
Day 2
Day 3
Posted by Kevin Markham at 1:04 PM