Bray Gets a Splash of Sunshine

[Photo: A sweeping panorama from the 11th tee at Bray. Wicklow and Dublin Mountains, and the Irish Sea]


Sunshine. Who would have thought we were going to see that again this summer? It was a perfect day for getting out onto a golf course and I hadn't been back to Bray Golf Club in five years.


Some 30 years ago, I used to catch the bus to Greystones to visit my grandparents. The 84 would climb up the hill out of Bray on its way to Windgates, passing enormous crop fields on the left. They rose steeply up the hillside and when, years later, I heard that Bray were moving their golf club to those very fields, I thought somebody had been too long at the Poitín. But move they did (although the old course, down near Superquinn, is still being played), in 2003, and an impressive job Des Smyth made of it. 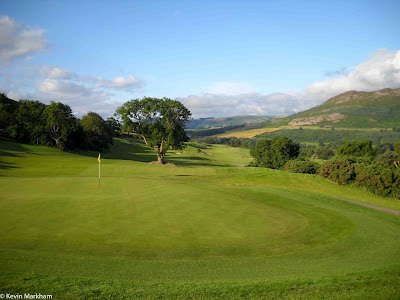 [Photo: view back down the par five 6th]


On a sunny morning it is easy to love a course that has views like this. The clouds spun shadows over the Wicklow Mountains that are visible for the entire round, and the quality of the greens here has always impressed me. The course is in great condition too, with the Metropolitan Cup semi-final to be played here on Sunday (against Stackstown).


There is a five year plan in place to make improvements, and some of the early work can be seen around the 18th tee box. There has also been a shift in fairway lines, with the rough being allowed to grow up and close in on fairways. As a balancing measure, the rough around the edges of the greens has been taken away. When these changes were first delivered, members thought it would make the course too easy... but of course removing the rough means that balls can roll off greens and keep going for several feet, down the flanks of the greens. It leaves tricky shots to get up to the pin. Alan Threadgold, the Manager, told me that since the changes scores have gone up. 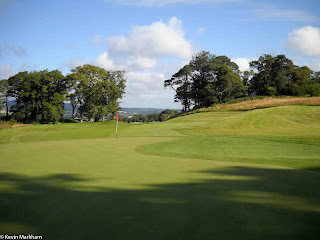 [Photo: the view of the 18th green and back to the small gap in the trees that you have to play through]


The one thing you have to remember about Bray is that the greens are big and have plenty of undulations. If you don't get it close with one of your little bump and runs up the banks, you'll be two-putting for sure. I picked the par three 2nd as the Toughest Hole, in Hooked, but it looks innocuous from the tee. At 153m you don't expect too much difficulty, but it's Index 5 for a reason. And that reason is the green.


The full set of 45 Flickr images can be found here. 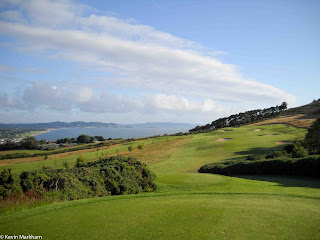 [Photo: the hole that I suspect Bray would offer as their 'signature' hole - the short par four 11th]


Bray has matured very well in just under a decade and it is well worth a visit. If you're thinking it's too steep, there are only a few climbs (the 10th and 17th), of which most are from green to tee and on the front nine. There's also the extremely comfortable clubhouse.