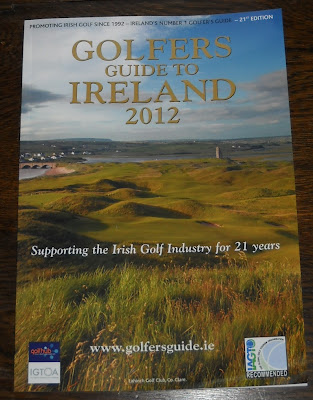 So said Michael Ring TD, Minister of State for Tourism & Sport, at last night’s launch of the 2012 Golfers Guide To Ireland. His point was that we had to stop beating ourselves up, and spend more time focusing on the positives. And, on the back of a 7% increase in tourist numbers last year, he had reason to be positive. His audience was the great and the good of Irish golf clubs (north and south) who had assembled for the launch of the Guide and the inaugural Golfers Guide Awards (in association with Tipperary Crystal), at O’Connell’s Restaurant in Donnybrook.

Paddy McCarthy and Marty Burke are the men behind the 21st edition of a guide that gives a snapshot of every golf course in the country. It also gives a multitude of accommodation options in each of the provinces. Greg Allen, who spoke at the launch, has written a piece on Golfing Getaways around our island. He picks many of the high profile courses and throws in some lesser known gems as well (Strandhill and Concra Wood most notably), alongside suggestions on where to stay. 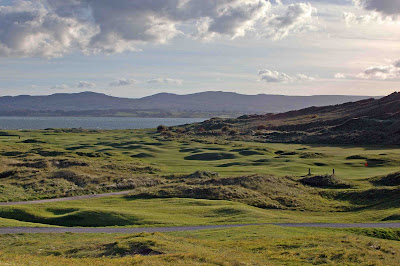 The award giving – by Michael Ring TD and a representative from Tipperary Crystal – was the main event and it was one of the smartest ways to identify and reward the ‘best’ golf clubs, because it didn’t attempt to rank anyone…

… not like Golf Digest Ireland’s top 100 courses, which were published before Christmas, and Backspin’s top 30 parkland/links courses, published only a couple of weeks ago. Both have come in for a bit of grief from the golfing public, despite having their merits and different approaches to rating and ranking.

The Golfers Guide picked straightforward categories and then divided them by province. The only ‘ranking’ that occurred was to pick one overall winner in each category. 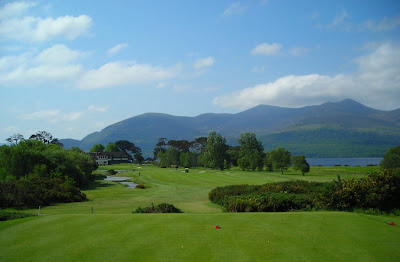 [Photo: the finishing hole in all its glory on the Killarney Killeen course]

Each of the award winners received a unique Graham Knuttle commissioned ceramic wall plaque crafted by Tipperary Crystal… and the kudos of winning an award which I imagine will become both reputable and popular in the years ahead.

A Bit About the Publisher

Portside Publications is an Irish publishing company operating in the tourism sector for over 21 years. Its Golfers Guide to Ireland has enjoyed uninterrupted annual publication each year making it Ireland’s longest established golf guide. 50,000 copies have been printed this year and the Guide will be distributed and be available free of charge to every golf club in Ireland. An on line version will be distributed to golf clubs in Japan, Sweden, the UK and North America.

Portside Publications Director, Paddy McCarthy, said the Guide had become an essential part of the travelling golfer’s kit when planning a trip to or within Ireland.

“We have had magnificent support from Ireland’s golf industry throughout the years and I am happy to report that the industry has expressed its confidence in the future and through the Golfers Guide to Ireland has joined with us to market their businesses through this coming year. This evening’s awards inaugurates our wish to recognise individual achievement on an annual basis by those involved in our industry”.

My thanks to Paddy and Marty from Portside Media for the invitation to attend last night’s launch, and congratulations to all the winners. It was great to see many of my favourite courses achieving the acclaim they deserve. 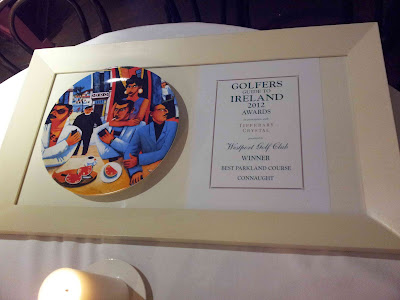 I met a great bunch of people from Ballyliffin, Dun Laoghaire, West Waterford, Dundrum, Killarney and Bunclody golf clubs, but still didn’t get to speak to nearly as many people as I would have liked. Everyone was in great spirits and feeling positive about the year ahead… and that was well before Michael Ring’s call to arms. The only challenge for award winners is deciding where to put the Graham Knuttle commissioned ceramic wall plaque. I doubt the personalised bottle of Tyrconnell whiskey given to each winner will present such a problem.

Posted by Kevin Markham at 4:38 PM