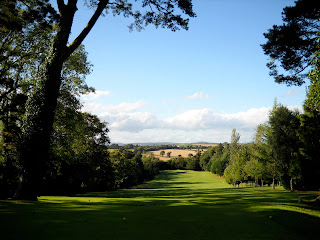 “No, the other way around.”

“Go on, would you. There are people waiting.” The exasperation in the man’s voice was obvious.

The young lad tried it, complained some more and finally heaved that big shoulder-shrugging sigh so perfected by teenagers the world over.

“Jeese, this is a stupid game,” he muttered, stomping off the tee. 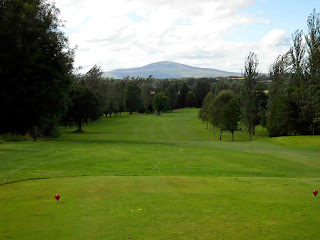 It had been a few years since I visited Enniscorthy Golf Club. It’s laid back, friendly and brimming with great country atmosphere - a natural (i.e. not over-designed) rolling parkland that flows with the landscape.

I had been invited to a Golf Classic (a four man team event) for the local GAA club and, after a miserably wet morning, the skies had cleared for our afternoon round. But the rain had delayed play and we were waiting for a man and three young boys. Now it’s not often that you see a kid hitting his first golf shot on the opening hole of a full-blooded 18 hole course, but that’s the no fuss, no pretensions of Enniscorthy. Wear jeans, wear whatever you like, come along and have some fun. 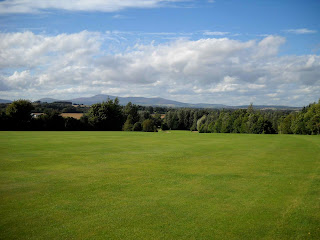 [Photo: Enniscorthy's best views on the approach to the par five 11th]

The hurling grip in golf is not to be sniffed at. True, there are no professionals on the tour who favour it, but there’s a golfer at Greystones, Shane O’Connor, who is one of the best in the club. This year Shane won the President’s Prize (matchplay) and he is a stalwart of the Barton Cup team. The grip may look cack-handed to traditionalists but if it works, it works.I’d love to tell you that the kid hit a screamer of a shot, but he duffed it about twenty yards. “Bollocks,” he said. He produced another ball, teed it up, reversed his hands into the traditional hurling grip and smashed the ball out of sight over the trees. 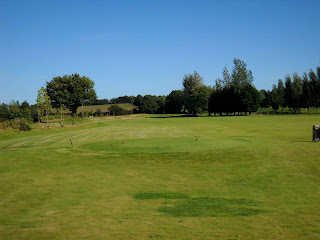 Since my Hooked review, Enniscorthy GC has introduced two new holes. Out went a very good par three and short par four, and in have come more fancily designed replacements in a big field alongside. They had to be replaced for safety reasons, I was told. The new holes are not as good and, because they’re brand new and stuck in a field, they interrupt the flow of the old part of the course. They’ll get better with age, but at the moment they feel a bit wrong.

I had been invited to the event by the three-brothers-Carter. Peadar, Noel and Seamus have handicaps in the high teens and twenties so, as the low man, I was put up first. The opening hole is a par three; I put an iron into the middle of the green and then four-putted from 20 feet. After that it all went downhill. The greens, drenched with the morning’s rain, were still lethally quick and their considerable undulations make it hard to gauge for the occasional visitor. That’s my excuse anyway. 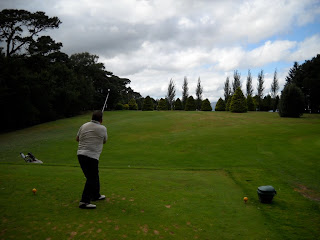 After the wasp incident at Mount Wolseley, Enniscorthy offered up an alternative: small black flies by the thousand. My cream coloured shirt was covered for much of the round. After a few mouthfuls of the things, and the coughing and spluttering to remove them, the conversation was kept to a minimum.

Our combined score was shocking and we would have won the booby prize if there had been one on offer… which is a tad embarrassing when the group in front of us included someone who had never played the game before. On the plus side, I put some money in the raffle and walked away with a bottle of Jameson’s. And the clubhouse is still one of the friendliest I’ve ever been in.

Posted by Kevin Markham at 9:38 AM