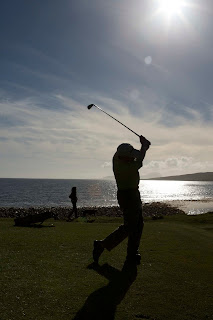 “You know why the mattresses have International Orthopaedic Association printed on them, don’t you?” My brother-in-law, Perry, was standing on the 1st tee at Mulranny Golf Club in Co. Mayo.

He took a practice swing and groaned. “Because that’s who you need to go and see after you’ve slept on them.”

He wasn’t wrong. The beds were on the concrete side of firm and all of us had been walking a bit awkwardly after two nights in the hotel.

This was a family gathering (6 of us) for my mum’s birthday. Dad, Perry, Fiona and I had slipped away to play nine holes on a perfect golfing afternoon.

We were spending a long weekend in Newport, and my dad and I had been plotting how we could get out for some golf – as you do. Mulranny was close by, a nine hole course (so we wouldn’t be too long), and Perry had mentioned that he’d like to play. These made persuasive arguments and my mum gave us a day pass for Saturday afternoon. 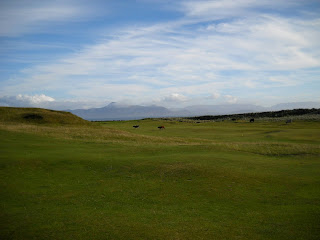 Unfortunately we arrived at the busiest time, not just of the day, but of the year. The front man, John Rooney, told me later that they had two competitions, casual members, a society and green fees. Combine this with people who drive across the course (to the beach), walk their dogs aimlessly across fairways, sheep who wander around the clubhouse and cows that have taken up residence on the 17th tee box and you will appreciate why a round at Mulranny is such a chaotic adventure.

But it is an adventure for sure. The scenery is heavenly as you look out onto Clew Bay and Croagh Patrick beyond, and the golf is the kind of links golf that will have you tearing your hair out. But in a good way. There aren’t any severe climbs but it’s rarely level, and the greens have big slopes on them that turn great shots into knee-quivering putts (or chips).

This is the last course in Ireland where livestock still roam freely (the greens are fenced in by barbed wire, so don’t try climbing over them), and while a golf ball in a cow pat is a rare event, it can still happen. This is the sort of course that should be in my book. It’s good enough, and a great experience and, at only 20 quid, it’s value that warms the heart. But it’s a 9 hole course. 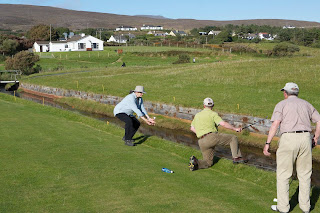 [Photo: playing catch after a ball finds the stream short of the 7th green]

Perry is new to golf. I didn’t realise quite how new until he confessed on the 1st tee that he’d never been further than a driving range. This could be interesting, I thought, handing over my rescue club. Perry took his stance, shrugged his shoulders a few times and then hit the ball straight down the middle.

“Beginner’s luck,” he quipped with a grin. Sadly, so it was to be as a few fresh airs followed on the fairway. He persevered until the 6th and then resigned from the threeball, taking photographs instead. As an introduction to golf, this is a fun course with no airs and graces, and the views are captivating. I think he had fun.

On the 6th tee box we encountered a woman and her dog, looking very confused (the woman, not the dog). She asked us which way we were playing. It was an interesting question: in one direction was the green; in the other was the sea. She reappeared on the 8th oblivious to the golfers driving over her head. It’s that kind of course, and the informal clubhouse, made up of portakabins (but a lot better than that sounds) adds to the atmosphere of relaxation and welcome. 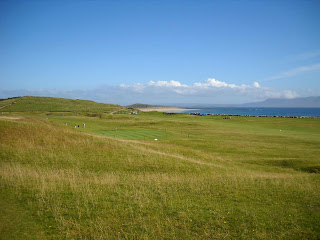 [Photo: views over the third green from the fourth fairway]

I handed John a sand wedge after we’d finished. I apologised and told him that my neighbour had been up a few weeks before and had forgotten to return it with his rented clubs. That, of course, was a lie. It had been sitting in the back room of my house for ten years. I played here with a mate, rented clubs and was given a driver, a five iron and five wedges. I left one of them in the boot of the car and forgot all about it.

Finally, a brief question for geography and history experts: Why is Mulranny spelt in four different ways? I saw Mulranny, Mulrany, Malranny, Malrany. True, there’s not a lot of difference, but this is a small place – does it really need four variations?

Posted by Kevin Markham at 3:50 PM