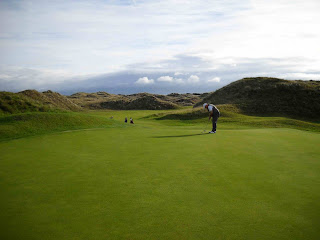 As starts go, it wasn’t a good one. I have been driving for 25 years and it was the first time I’d done it.

The petrol station was packed with those morons who insist on parking in front of the pumps even when they’re only going in for a pack of fags. I had to manoeuvre around them to get to the only free pump. I was annoyed, to say the least, but not half as annoyed when, €60 later, I realised I’d put unleaded into my diesel tank.

“We get two call outs a week,” Morgan told me as he towed me away to the local garage. “All of them men.”

It didn’t make me feel any better. At least, I rationalised, if I don’t make the same mistake for another 25 years I can claim senility. For now, stupidity was the only appropriate word.

I’ve spent more time at O’Connor’s Garage in Ballycanew than I have at my local pub. The camper van had a couple of lengthy stays and now it looked like I was in for another long one. But Morgan gave me a loan of a big Citroen, and my trip to The Island was back on track.

As salacious as it sounds, I met Jack online. Thesandtrap.com is an American golf forum, and he’d been asking for advice on playing in Ireland. I happily made some suggestions and we ended up agreeing to play at The Island. [Photo: views from the elevated 6th tee - the 5th comes down from the left, the 6th drifts right]

Jack comes from Phoenix and his playing partner for the trip was Jon, from North Idaho via Kansas City. It was their first time in Ireland and from what they told me, they particularly liked the Guinness. They’d played seven rounds in eight days, only missing out one round (at Galgorm Castle in Ballymena) because the rain was so bad. They’d also had to abandon their day trip to Scotland because the ferries were cancelled due to wind. It sounded a bit unfortunate, but they’d enjoyed Ardglass, Royal Portrush, Portstewart, Castlerock, Cairndhu, Baltray, and now they were finishing at the Island. And it was a beautiful day. At least, it was at the start.

Jack and Jon were playing a match. After six rounds of golf, using the Stableford scoring system, they were level, so this was the crunch game. They were playing for money although I never discovered how much. Jon plays off 6, Jack off 11. I’ve played in matches when the intensity is worse than the British Open – this was not one of those days, and we had a great round.

“God… Bless America,” Jack spat at one point after a poor shot. By the round’s end, America was well and truly blessed. 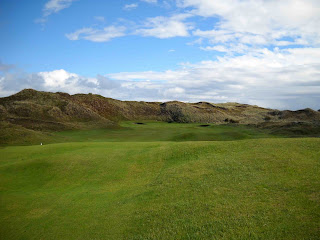 [Photo: the approach to the brilliant par five 15th]

The Island is undoubtedly Dublin’s most enthralling links, yet it rarely gets the credit it deserves. [All Photos Here]. Big dunes, twisting fairways, great green complexes. It didn’t make my top ten must-play links courses, but that’s only because the views here aren’t as spectacular as elsewhere. Jack hadn't heard of it until my recommendation. The course is known for a number of things: eight par fours to start; Index 1 to finish; the narrowest fairway in Ireland (14); the fact that golfers rowed across from Malahide to play the course (the old clubhouse was by today’s 14th tee); and the enduringly difficult par three 13th which invariably hits into the wind.

The rain had stayed away but as we walked up to 13 it decided to show us what it was capable of. It came at us horizontally, in a stinging squall that bites your face and soaks your clothes before you’ve even had time to say ‘waterproofs’. This was Irish rain, and it was coming straight at us from the 13th green, 192 metres away. How strong was the wind? Jon, head bowed, cracked a Driver straight at the flag and came up 20 yards short. 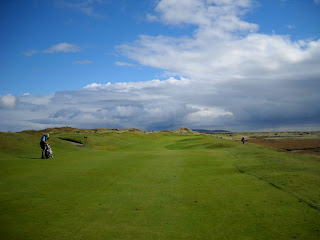 I asked Jack on 15 how their match was balanced. Jack was three ahead on the front nine, but Jon was three up on the back. They halved 15 and Jon missed a two footer on 16 to take a point lead, but the match as good as ended on 17. Jack hit a drive and three wood onto the green and then sank a 40 foot putt for birdie and four points. He was, understandably, ecstatic, and Jon could do nothing on 18 to claw back the points.

In the bar afterwards I asked about their best and worst experiences. From a golfing point of view, Ardglass topped the list. They said the experience and value (best in Ireland they said) were superb, and from my perspective I found it invigorating that they lumped the two together. You can play a brilliant course, but if the value doesn’t match up, you can walk away with a sour taste in your mouth. And it was a sour taste in their mouths that was mentioned as their negative experience.

“What,” Jon asked, “do they cook Irish breakfasts in? They leave this aftertaste.” As they knocked back their pints of Guinness I’m guessing they’ll forget about that aftertaste fairly quickly.

Thanks lads for a great day out. 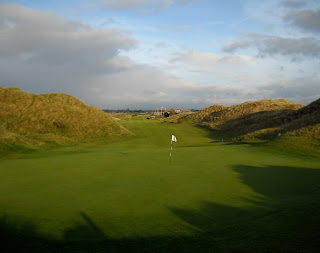 Posted by Kevin Markham at 3:56 PM

Email ThisBlogThis!Share to TwitterShare to FacebookShare to Pinterest
Labels: The Island Golf Club