Who’s the fairest of them all? 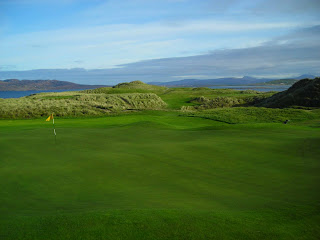 [Photo: views over the 11th at Narin & Portnoo]

As Cameron pointed out, one seventh of England (that’s England, not the UK) is designated as an area of outstanding natural beauty. In Ireland, we build motorways through our most cherished heritage. Hmm, no contest there. In England they have the Lake District, the New Forest, the Yorkshire Dales… in Ireland we have Special Areas of Conservation (SACs) that seem to have little effect on developers who see such areas as prime real estate. 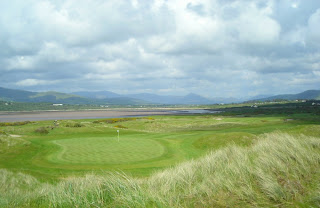 [Photo: some of the 360 degree views at Waterville]

And let’s not forget that the UK includes Scotland with some of the greatest coastline in the world; Northern Ireland and her Glens of Antrim; and Wales with her Snowdonia National Park.

Ireland is beautiful for sure (The Burren, Connemara, west Cork, Kerry, Donegal among others), and I have been lucky enough to see a lot of it, but to be 12 places ahead of the UK is daft. The AGRNBI (even the acronym’s a mouthful) survey is spouting rubbish and has clearly been influenced by Ireland’s marketing efforts, which, it has to be said, is a great reflection on the work of Failte Ireland. The current advertising campaign is particularly evocative.

How is the rating conducted?

The study polled nearly 20,000 people in 20 countries, asking more than 40 questions about their perceptions of 50 countries. The survey covers several other aspects of ‘Nation Brands’, including investment, people and tourism. The ‘Most Beautiful Country’ is just one of these and I guess if you bombard people with enough targeted marketing messages and Ireland’s elegant landscapes you come 12th. 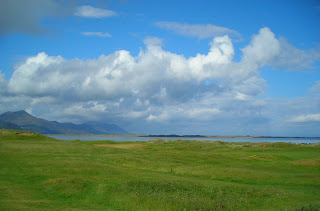 [Photo: some of the views from Dooks]

For golfers, many of Ireland’s beautiful landscapes and coastal views can be seen from our courses. Most prominent among these are Carne, Connemara, County Sligo, Dooks, Killarney, Narin & Portnoo, Old Head, Royal County Down, Scrabo, Tralee and Waterville.

Posted by Kevin Markham at 3:11 PM