Another year passes and many more photographs have been taken of courses in Ireland, Scotland, France, Iceland and Portugal. Here are my top 10 golf photos for the year.


1. Carton House O'Meara
The 16th is one of our most picturesque par threes and the late evening light shows off the tree trunks and canopies that frame the green so enchantingly.
2. Carton House Montgomerie
On the same visit, the 18th green on the Montgomerie course looked rather spectacular from the other side of the River Rye.
3. Druids Heath
The par five 2nd has always proved deceptive with water hidden on the approach to
the green, but the view from the 1st fairway down the hole gives you a glimpse of what awaits.
4. Enniscrone
This is such a photogenic course and I have taken photographs here over several years. This view of the par three 17th green, however, was completely new to me. This is directly to the right of the green and shows the slopes that fall away from the putting surface.
5. Fota Island
The 18th green at Fota Island has always looked good, lying as it does in the large pond of water. The purpose of this shot was to show off the bank of trees that flanks the right side.
6. Galgorm Castle
Chasing the mist that rises over ponds in the morning is usually a fool's errand... but then again, when it works, it works, as shown in this shot of Galgorm Castle's 4th hole. The 3rd flag is also visible to the left.

7. Lough Erne
One of Lough Erne's signature holes is the par four 7th which slides out on a small peninsula into Lough Erne. This angle (from near the 6th tee) shows how small it looks.
8. Royal County Down
The typical photos you see of Royal County Down are not of the 5th... as here... but the sunrise made this a lovely image that shows off the dunes that chaperone the hole. It also emphasises the simplicity of the greens.
9. Strandhill
An official photoshoot, this is one of a dozen images that could have been included here. It's the par four 6th. The sea and the clouds seal this photo's place as one of my top 10 photos of the year.
10. Dom Pedro Victoria (Portugal)
I got to play here before the Portugal Masters and the late evening light proved irresistible for this moody shot of the 12th green.

From a personal point of view... two of my favourite shots of the year are this pic of a whale in Northern Iceland. Bucket List stuff for me. 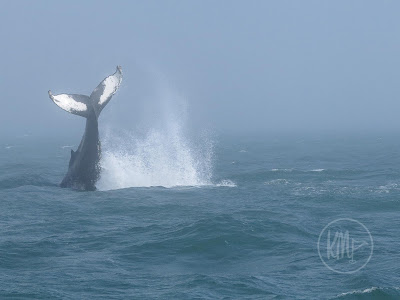 And the 2nd is not taken by me at all... this is the Pro-Am team at Dom Pedro Victoria, back in September. You might recognise the guy in the middle. Our score was -33 and we weren't even close to the prizes. (46 under won.) 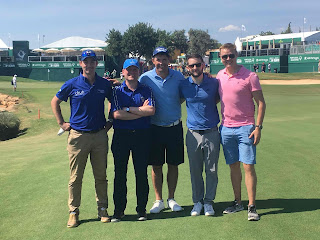 Posted by Kevin Markham at 5:18 PM