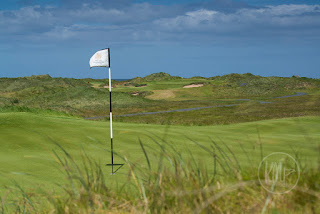 You might wonder if you’ve accidentally hit the wrong key and been transported into a marketing magazine. You haven’t. Brand values may most commonly be discussed in terms of the global giants (Coke, McDonalds, Facebook, British Airways) but they are an essential component of every company, big and small, local or multinational. Protecting and projecting those values is paramount to how a company positions itself against its competitors, and how it is regarded in the eyes of its customers, suppliers and stakeholders.
A golf club is no different. Ireland has small country parklands that few golfers outside the
province have heard of and we have world-famous links that golfers will travel thousands of miles to play in a howling gale.

It was therefore something of a shock to see Doonbeg – one of those world-famous links – promoting €90 (2-ball) and €180 (4-ball) green fees through a golf deals website recently.
Doonbeg is a five star resort with a high quality, meticulously maintained, often magical links on the Wild Atlantic Way. As recently as 2016 it had millions of euro pumped into it as Martin Hawtree upgraded Greg Norman’s original design. To play Doonbeg in peak season costs as much as €220, which puts it in the same bracket as Lahinch, just up the coast.
The Doonbeg resort oozes quality, exclusivity and aspiration. This offer oozed anything but.
Here’s an interesting note: Doonbeg’s November/December rate is €50pp during the week. In other words, that €90/€180 deals website rate wasn’t that big a reduction, even if it did include a pull trolley and range token.
It all begs the question: what was the thinking behind Doonbeg’s use of a deals website?
Such sites are now a mainstay in Irish golf and dozens of clubs use them to attract golfers through heavily discounted green fees. It’s a stack-them-high-sell-them-cheap mentality and that can work effectively as part of an overall, co-ordinated marketing plan. Smaller clubs use them frequently which, in my opinion, sets a dangerous precedent and makes it increasingly difficult to raise green fees longer term. Yes, you get the footfall and income in the short term but you’re making a rod for your own back. Such deals may also make members question their annual subscription. There are larger clubs using these sites too, e.g. Fota Island, Druids Glen, and Carton House, and while these three parkland resorts have all hosted the Irish Open they don’t have the global resonance of a links such as Doonbeg. Nor do they carry the Trump name.
It will surprise no one that this €90/€180 Doonbeg deal sold out. Why wouldn’t it at that price and on a forum where golfers crave cut-price green fees. The issue I have is that this promotional channel conflicts with Doonbeg’s brand values. It certainly detracts from that air of exclusivity that goes with Trump properties around the world. It fact, the only air it gives off is one of desperation. And if the marketing people at Doonbeg read this article and are left spitting because that’s not what this offer was about then I apologise… but that’s exactly the conclusion we golfers reached.


Look at all the marketing channels available and you will quickly appreciate that the deals website should be a long way down the pecking order for a course of Doonbeg’s quality and fame. Surely a focused social media campaign targeting key influencers and followers could have achieved the same result at very little cost… while also serving as a brand-building exercise. With November/December green fees as low as €50, word is going to get out there.
Perhaps Doonbeg thought its core audience of big-spending Americans wouldn’t see this offer so it does not matter. But it does. Where’s the pride in your brand and your reputation? There is a fine balance between ‘green fee value’ and ‘cheap green fees’. And Doonbeg does not want the word ‘cheap’ associated with it. If they want to be seen as a world-class, bucket list links (Hawtree’s changes have elevated it considerably) then this is not the marketing route to take. Royal County Down, for example, offers green fees of £60 during the low season but you can only avail of these through the club itself. Imagine if they promoted themselves through a deals site?  How would that sit next to their ‘No. 1 Best Course in the World’ status?
Then again, for every downside there’s an upside.
The €90/€180 deal ensures that, in the coming months, Irish golfers will flock to a course they probably can’t afford to play during the summer. And, because they bought it at a discount, they’ll reckon they have got something for nothing. Some will also head into the restaurant and bar, upping the resort’s income. And, with approximately 350 two-ball and four-ball vouchers sold, that amounts to between 700 and 1400 golfers playing the links in the low season. Sounds like that’s a good result for everyone.
The trouble is, such positives don’t outweigh the longer term negatives.
Every golf club brand has value and knowing the shape and character of that brand is essential if you are to promote it successfully. I worked in marketing for years and the concept of ‘brand value’ is not a difficult one. It says everything about your product or service and it takes years to build and seconds to undermine. Companies and, indeed, countries have (metaphorically) gone to war to protect them. Think Champagne and you’ll understand what I mean.
I know Doonbeg is not the first – and it won’t be the last – to utilise the deals route to sell green fees but there are better marketing opportunities out there… not just for Doonbeg but for every Irish golf club. Heavy discounts bring in the punters, no question, but it is not a productive strategy. Building loyalty and building your brand requires more work than that.
Now, that all said, Doonbeg is running a much more appropriate offer through Irish Golfer Magazine. Here it is: 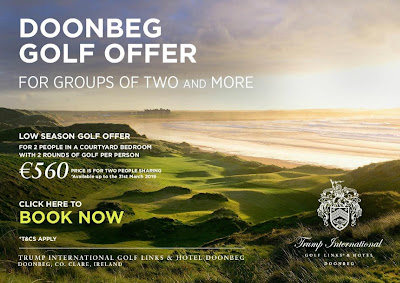 Posted by Kevin Markham at 9:08 AM

Email ThisBlogThis!Share to TwitterShare to FacebookShare to Pinterest
Labels: Doonbeg