It’s not often you get to visit six Irish golf courses in a day… the fact I was trying to make it to seven is beside the point… but needs must. And visiting Ireland’s finest is hardly a hardship. A 550 km tour from Wexford-Dublin-Baltray-Mullingar-Kinnegad-Dublin-Wexford.

Here are some photos from the tour:

Rathfarnham Golf Club at sunrise included five swans patrolling the fairway in front of one the club’s new holes – which moved from a 15-hole to an 18-hole course last year. Given the hour, I expected to be the lone golfer on the course but there was someone pushing his clubs towards the 4th green when I arrived. He must have started in the dark.

Formerly known as South County this is a course I really enjoyed when I first visited it back in 2007. Close to Dublin, but tucked away in a valley, Lisheen Springs feels far removed from the hustle and bustle of Dublin city life. Only the traffic flowing by on the road gives an indication of its location. The course is not in the same pristine condition it once was – the course closed and re-opened under new ownership a short time later – but it’s not far off, and the number of golfers heading out onto the course was an indication of its continued popularity. 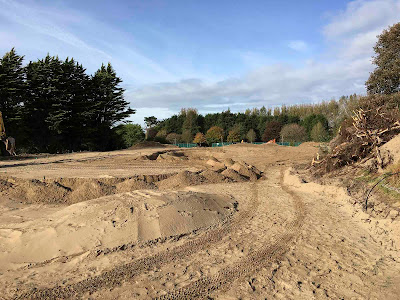 The course with two names is introducing a stunning new short game practice area to the right of the driveway as you enter the club. Gone are the trees and tennis courts and you will get that ‘links feel’ from the moment you turn off the road. The area is due to be ready next year but you can already get a feel for what it will look like. The course review in the forthcoming issue of Irish Golfer Magazine will be Co. Louth.

There have been numerous changes at Seapoint in the past few years – and these are ongoing. The 18th green was moved back 30 yards or so, the 9th green has been moved to the right and 21 bunkers have been removed. Some new tee boxes have been added – most impressively on the 18th which now promises the full views of the course, ocean and distant mountains – and, most interestingly, new mounding has been added to several holes on the front nine, which always had the feel of being too flat and open… and not really links holes.
David Connell, one of the club directors, assured me this is indeed links land… but after being farmed for many years the true links character is deeper down. Upgraded pathways will give a more professional air to proceedings, as does the new practice/golf academy next to the 1st tee.

It’s never a hardship driving in to New Forest Golf Club. It’s a sweet drive between several holes and it shows off the course’s charms. The views from the top of the ‘clubhouse’ are even more enchanting but getting up there is definitely a hardship. It requires two ladders… but boy was it worth it!
At four storeys high the house dates back to the 1760s and standing on the roof gives views for miles around. Not surprisingly, my focus was on the golf course below – see photo above.

The club opened in 2006 and was designed by Peter McEvoy. It’s a genuine peach of a parkland course but you need to be playing well to take it on… it’s not an easy proposition. It is, however, a beautiful and peaceful course to play. Add in the new driving range and apartments and this is quickly becoming a seriously exceptional venue for visiting golfers.

Des Morgan, the Director of Golf at New Forest, mentioned Moyvalley during my visit and when a sign for the resort appeared on the roundabout, en route to Rathcore, I changed course and headed to Moyvalley instead. The final of the PGA was held here in September, won by Damien McGrane, and it seemed an opportune time to see what condition the course was in.
The name of the course has changed to Twin Oaks Championship Course at Moyvalley and the condition (as at New Forest) is back to its best. There are those who don’t like what they regard as a featureless landscape, but I prefer to look at it as having a hypnotic rhythm, the gold of the rough contrasting sharply with the lush green of the fairways and greens. Not that there was any gold left in October. All the rough has been cut, and very recently by the looks of things.

My day finished there, next to the 16th green, as a rainbow flittered across and the sun slipped below the horizon.

Six out of seven isn’t a bad return for a 12 hour day... although Lee Van Cleef might disagree.
Posted by Kevin Markham at 8:57 PM