There have been numerous interesting developments in recent weeks as the summer/autumn golfing season begins to wind down. No question, we’ve had a great couple of weeks and for those lucky enough to have been on the golf course, many have been basking in sunshine. It should inspire the warm-weather golfers to keep going a bit longer.

Here are a few bits and pieces worth talking about:

This is a remarkable opportunity to join two clubs for one membership fee… and play three courses. Not only that, it combines parkland golf at Killarney Golf & Fishing Club with links golf at Dooks, which means there will be no issues playing during the winter months. And all three courses have stunning scenery and impressive golfing reputations. You’ll have to phone up to find out the membership rates… but this is a really smart initiative and I tip my hat to those who devised it. Nice one, guys! Check out the flyer below for details. 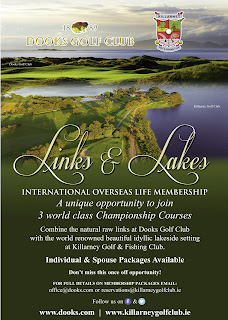 Following over €1 million in investments – with more to come – both the Bernard Langer-designed links and the Portmarnock Hotel have been revitalised. This was always a perfect golfing hub with a quality golf course right next to the hotel and the resort is once again running their Winter Series. From October 11 to March 14 2017, there will be an Open every Tuesday for golfers with a handicap of 9 or less. Entry fee is €50 (not an insubstantial amount, I admit, but this is a special links and very different to its immediate neighbour). PGA Pros (yes, Pros can compete in it too), Juniors and Members can enter for €30.
By the way… the events are played from the back blue tees… which measure 6,444 metres. Not for the faint hearted, especially with the tough but brilliant finish.

Like the European Club, this series has become a significant winter golfing fixture for golfers with low handicaps.

Yes, those people at Ireland’s terrific links courses are rubbing our parkland noses in it a bit! Castlerock Golf Club, up on the Northern Irish coastline is also running a Winter Series, which sees eight events being hosted between October and April. There’s an order of merit, too… for the hardcore golfers out there. Entry is a mere £15!!
The first event is on October 19th. You’ll find some beautiful holes here with 8, 9 and 10 simply scintillating. Call 048 7084 8314 (from ROI). 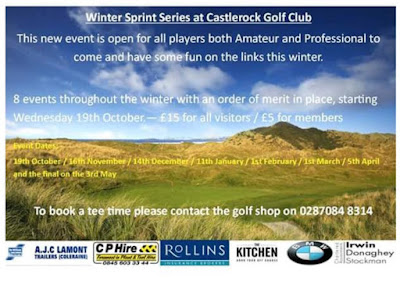 Now, as a massive fan of Royal County Down, any opportunity to discuss the course is too tempting to avoid. And when the Slieve Donard Hotel, which sits right alongside and lends its impressive spire to so many images of the course, has a special event which appeals to a craft beer-head like me, then I’m going to give it a plug…

The hotel is celebrating locally produced beer, cider and spirits in the Grand Ballroom with Whitewater Brewery, Kilmegan Cider, Farmageddon Brewery, Tempted Cider, Hughes Spirits (Ruby Blue vodka) and Shortcross Gin all in attendance. Local food producers include Kearney Blue Cheese and Fivemiletown Creamery. Tickets are £12 and can be purchased at reception or by calling 028 4372 1066. You could always stay the night in the very plush four star hotel and then enjoy a round of golf on the brilliant links the following day… after a cracking cooked Irish breakfast of course!

The golf will cost you £200 for the round… not cheap, I know, but this is rated by America’s Golf Digest as the best course in the world… or you can play the intriguing, short (par 66) and really rather dazzling Annesley course for £40. It uses the same landcape and it has three new holes.

Lots of action going on in Cork if you fancy rolling up to the colourful, plush Fota Island Resort. During the month of October you can enter their Open Singles for the price of €59 per golfer – which includes 18 holes, an appropriately themed main course special (chicken schnitzel, anyone) and a Pint of Chieftain Craft Beer. At the end of the month the highest scoring golfer will receive a Weekend Trip for two to Munich, including flights and accommodation. Bookings are limited so visit their website and arrange your round.

Plenty of other prizes, too.