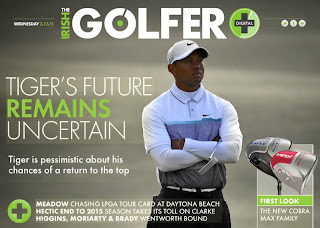 No, this is not a 'top ten' Irish courses...  this is about interesting, fun and relevant courses for 2016. You should, at the very least, be sure to experience at least one of these next year.

(This is my weekly column for Irish Golfer Digital +.)

1.     Dun Laoghaire. Expect considerable Irish interest in the biennial GB&I vs USA Curtis Cup, to be held here from 10-12 June 2016. The club boasts three nines – I’d recommend Lower and Middle – with plenty of water and that feel of a ‘big’ parkland design. Be sure to enjoy the sensational clubhouse and spectacular views.

2.     Greystones. My home club – I admit – but also home to the newest Irish professional golfer. Paul Dunne learned his craft here and the course calls for intelligent golf and a good short game… something Paul has in spades. There are two distinct nines: the front wraps around Jones’s Hill and often involves gorse; the back nine is over more level parkland terrain. Excellent greens.
3.     Rathfarnham. The latest member of the ’18-hole’ club, Rathfarnham is a colourful parkland dating back to 1899. It sits at the foot of the Dublin Mountains, next to the M50, promising water on half its holes and real parkland variety. Some holes are tightly shepherded by trees while others have more space. It tests every aspect of your game. (A full write up will appear in the next Irish Golfer Magazine.)
4.     The Island. A course that never tires of making subtle improvements (just follow their head greenkeeper on Twitter: @festucaman). It remains Dublin’s most enthralling course with big dunes, endless variety, beautiful tests… all day long. If holes 13 to 18 don't blow you away, check your pulse. And you’ll probably bump into Gavin Moynihan.
5.     Corballis. Next door to The Island, this is Ireland’s only public links. It is short, a bit tight in places and the clubhouse is no more than functional, but this is a fun links and it’s as cheap as chips. The conditioning is very good, too, so if you want to experience what links is all about, Corballis is an ideal place to start.
6.     North West. 2016 sees the club’s 125th anniversary. It is a links often ignored, just a few miles south of Ballyliffin, but North West has tremendous history and such subtly devious fairways. Another course enjoying an upgrade in conditioning (and bunkering). Don’t be put off by the fact it looks flat from the road… it isn’t.
7.     Mount Juliet. Personally speaking, I’ve felt that Mount Juliet has been in decidedly average condition for the past few years. That is now changing following new owner investment of €1 million on new equipment. Constantly rated as Ireland’s ‘best parkland’ it will be good to see it return to its former glories… if at higher green fees.
8.     St Margaret’s. The course suffered badly after the Celtic Tiger collapse, but it has been pretty much reborn in less than a year. Still a society favourite this is very enjoyable parkland golf near Dublin Airport.
9.     Rathsallagh. A course that closed in 2015, but is set to re-open next year. Set in the depths of Co. Wicklow, if you’ve played it then you know how good it is… if you haven’t, get out there and enjoy playing between magnificent trees – not one of which was felled in the design of the course.

10.   Royal Portrush. No guesses why the Dunluce links has been included. The two new holes are being developed as the club prepares for its historic hosting of the 2019 Open Championship… and you will be able to see these from the 13th green. Check out their blog: www.royalportrushgolfclub.wordpress.com

Posted by Kevin Markham at 8:06 PM

Email ThisBlogThis!Share to TwitterShare to FacebookShare to Pinterest
Labels: Ten Irish Golf Courses to Play in 2016