[December 2015]
The new Top 100 rankings from Golf Digest Ireland (GDI) are out today. There's a new 'judging panel' which has undoubtedly resulted in some of the changes, but there are still some surprises.

Consider that last year's ranking was a screw up. The independent panel's ranking was altered by the magazine's
editor after the list had been signed off. That's not exactly good. The magazine's rationale was that GDI had to stand over the rankings and there were certain changes that weren't justified... but isn't that the whole point of having an 'independent' panel. Most of the changes were small, but one of the most obvious was Castle Golf Club pipping Grange for the first time in the ranking's history. The editor changed that back.

So what about this year? Let's start with the obvious - Christy O'Connor Junior is now a significant player on the panel. It is no surprise therefore that a couple of his courses have moved up the table. Galway Bay is up 10, Knightsbrook is up 3, Concra Wood up 2, Mount Wolseley is up 1. The course he is redesigning at Moyvalley is a new entry (98). I like the course, but entering the top 100 at this stage is a total joke. The course is simply not there yet. And I expect that next year, after the redesign work is done, it will move up some 10 places.
That's not to say all of his courses rose: Headfort New and Palmerstown Stud stayed the same and Esker Hills has dropped 2. And besides, I'd say that both Galway Bay Resorts and Concra Wood fully deserve to be higher up.

It is fantastic to see North West finally making it into the rankings. Long overdue... long, long overdue. The course celebrates its 125th anniversary next year. Make an effort to get up to Inishowen to play it.
Interesting things to note:
1. Dooks and Doonbeg have swapped completely. Dooks is down 4. Doonbeg is up 4. Dooks' greens are among the best in the country and the course has been given some nice professional touches following their 125th anniversary. Doonbeg, on the other hand, is being upgraded and these upgrades are not yet complete. How can it go up?

2. Cork Golf Club is down for the 5th year in a row. Down 4. Again, the club has made recent and significant changes to its bunkering, taking it back to its MacKenzie roots. It is undeniably a better course as a result. How can it still be dropping?
3. The Heritage is down 9. Wow!

5. Rathsallagh is gone altogether. No surprise. It'll be back in next year after the course reopens.

6. The red type indicates oddities: Macreddin is listed as a New Entry but it was a new entry last year. It stays at 100. Dingle is listed as being 'up 3' (to 75) but it is actually in the same position as last year. And St Margaret's is listed as being 'up 2' (at 91)... but it is a New Entry. Simple mistakes... not to mention copy being cut/pasted from last year's Top 100 edition. That's just lazy (and undoubtedly explains why Dingle is listed as being 'up 3').
7. And then of course there are all the courses that both you and I believe should be on that list... it's just a question of which ones should come off in their place. I could list 10 to be included without batting an eyelid... and the 10 which they would replace. 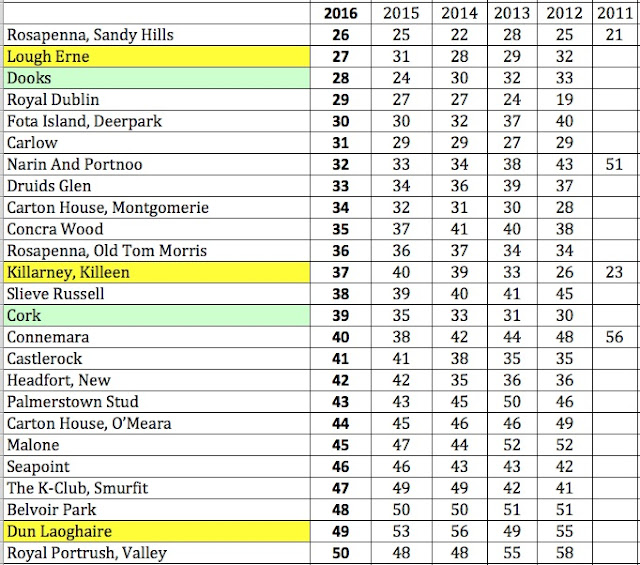 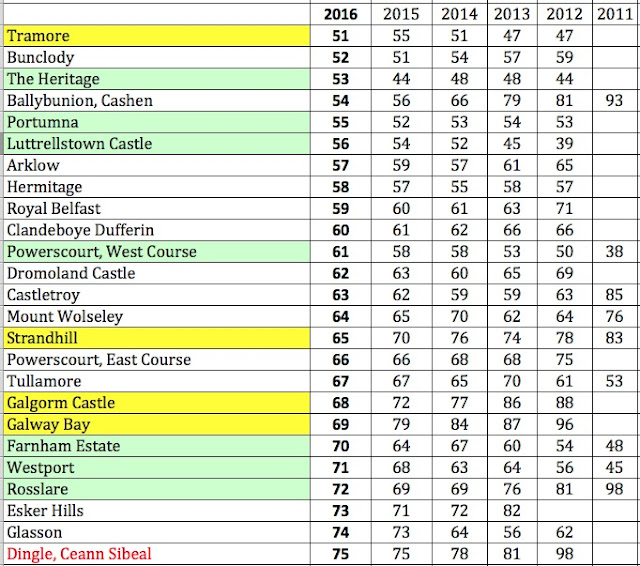 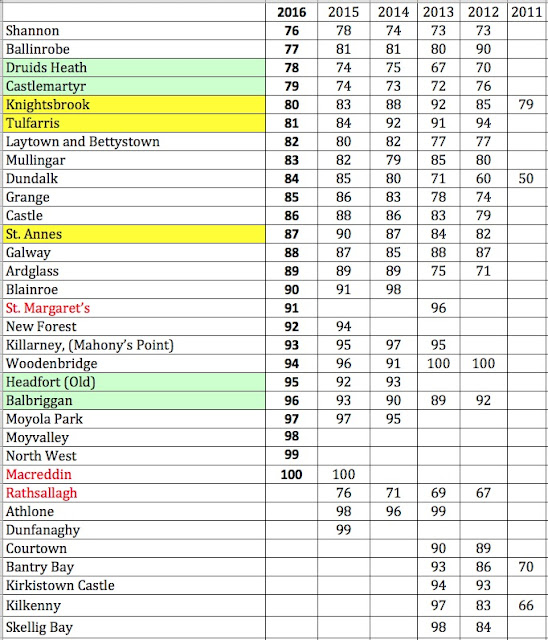 Everyone has their frustrations with this sort of ranking. It's no surprise. Not one of us would ever agree on a top 100, but my biggest issue remains that this ranking is taken seriously around the world because it's got 'Golf Digest' written all over it. It's not a great ranking... but it is a fabulous talking point.

Posted by Kevin Markham at 4:34 PM