The 2017 golf course rankings by Golf Digest Ireland have finally been released. These are laid out below. Just like last year you can pick and needle and doubt and gripe and despair at what you see here, but that's rankings for you.

Courses highlighted in green are those that have made significant moves.

Courses highlighted in blue are
new entries. The 3 new courses have replaced Moyola Park and North West... and Adare, which remains closed for renovations.

Please note that this listing was updated at 2.30pm on Sat 7 Jan, following an error on my part. This involves the mighty significant switch between Portmarnock and Royal Portrush, which have reversed places (shown in red in the list below). Royal Portrush has moved up to 2nd, with Portmarnock being knocked out of the top 2 places for the first time in over six years.

Perhaps the most dramatic/important moves are in the top 10, where Tralee usurps Ballybunion at number 6, and Royal Portrush swaps with Portmarnock for the number 2 slot.

The Tralee/Ballybunion switch is significant especially as the courses are close together on the Kerry coastline and they are two links revered around the world. Do you agree with the switch? When you see who is on the GDI's rating panel you'll appreciate how that change may have come about... that's all I'll say. And this is one of the inherent risks of having panellists who are intimately involved with a Top 100 course. What panellist wouldn't want to see their course move upwards!
The changes at Royal Portrush, ahead of the Open Championship in 2019, have probably influenced its rise to number 2. Personally, and assuming that's the case, I don't agree with the move as the 'new' course/holes won't be open until June. Yes, the new holes look magnificent but they are not yet in play. And having played Portmarnock only a few months ago I can assure you that the Dublin links is in pristine condition and playing as well as it ever has. However you look at it, it's a big call!

There is one other topical 'switch', which sees Castle rising above Grange for the first time, thereby claiming Dublin suburbia's top parkland spot (inside the M50). This is particularly relevant as the same switch happened in last year's rankings, only for the magazine Editor to reverse them at the last minute. An interesting one for Dublin golfers to debate, I'm sure. 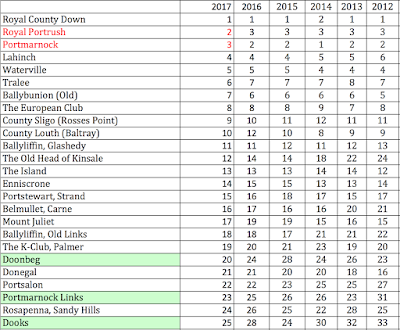 It's always intriguing comparing a course's ranking across a number of years (back as far as 2012 in these charts). Take Donegal at 21st, which is a non-mover this year... however it has been dropping gradually since 2012, when it was 16th. The Montgomerie at Carton House follows the same pattern.

Galway Bay, at 63rd, is doing just the opposite: it was 96th in 2012, and the constant upwards trajectory is a direct reflection on what has been taking place at the course. (And then there's the Christy O'Connor connection - see below.) Royal Belfast and Galgorm Castle are two more on a constant upwards climb. 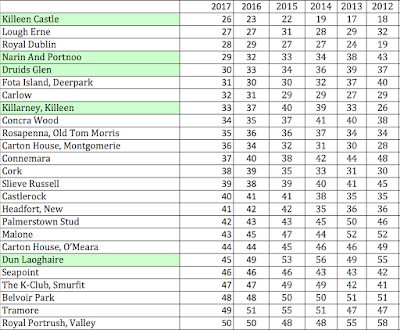 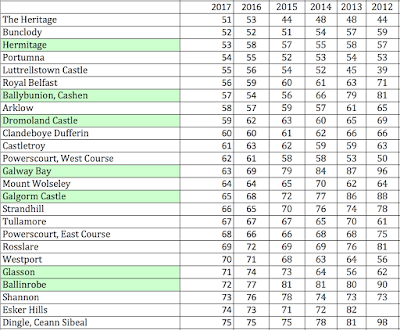 A couple of big jumps for Christy O'Connor Jr's courses. Christy was involved with the panel last year for the first time and his influence seems to have extended into the 2017 ranking. Galway Bay, Knightsbrook, Moyvalley all make healthy upward moves. 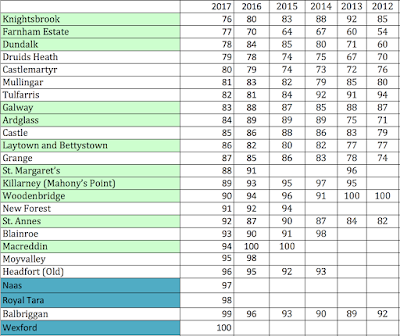 The biggest faller is Farnham Estate, which drops 7 places to 77th. Let's just say it should rise again after the upcoming €6 million investments have been completed. Other big fallers are St. Annes (down 5 to 92nd), Laytown & Bettystown (down 4 to 86th) and Ballybunion Cashen (down 3). Killeen Castle is also down 3 and may come as the biggest surprise, dropping to 26th.

The biggest climbers are all up 6 places: Macreddin up to 94th, Dundalk up to 78th, Galway Bay up to 63rd, and Killarney Killeen up to 33rd. Other significant climbers are Ardglass up 5 to 84th, Galway up 5 to 83rd, Ballinrobe up 5 to 72nd and, bizarrely, Hermitage also up 5 to 53rd. That's a big jump where no significant upgrades have taken place. Doonbeg's renovations have had a big impact, seeing the west coast links climb 4 places from 24th to 20th. County Louth has made it back into the top 10, having slipped out of the top tier for the first time last year.
That North West and Moyola Park have been dropped is sad (and wrong)... but the inclusion of Wexford is preposterous. I have nothing against the course but it is in no shape or form a Top 100 course. And Rathsallagh has still not reappeared even though it re-opened in June 2016, and is in excellent condition (see photo above).

Let's hear your opinions - fire them over.

There will also be a brand new Top 100 soon and it will be sooooo much better... but then I would say that, wouldn't I!

Posted by Kevin Markham at 6:38 PM