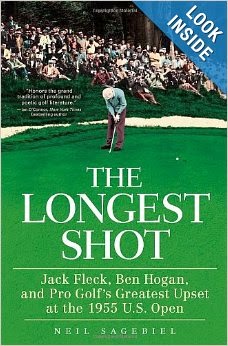 His name might have stirred a memory with you. Golfers tend to know the names of great champions even if they know little about the champions themselves. Jack Fleck's name burned its way into golfing folklore when he beat Ben Hogan in the US Open in 1955. In a playoff.

It was a brilliant victory and the two men - Fleck and Hogan - had lived very different golfing lives up to that point. If you want to read the story of how they got to battle it out for the US Open, I suggest you pick up a copy of The Longest Shot by Neil Sagebiel.

Neil's blog is here
Posted by Kevin Markham at 1:05 PM