The Hidden Golf Links of Donegal

By renting a cottage on Donegal’s coastline I was satisfying an urge to return to the grand dame county of Irish links golf courses. There are ten 18 hole courses after all, stretching from Bundoran up to Ballyliffin, and no other Irish county can boast such riches. Wherever I went, I’d be close to a fairway and dunes.

I should have known better. It’s hard to contemplate the sheer length and ruggedness of the coastline here and the roads don’t exactly make it easy – they’re not bad, but they weave in many directions and rarely in the one you wish to go.

Still, when your cottage has views like this, it’s worth the extra drive. We were in Kilcar, ten minutes west of Killybegs, in a house that was completely isolated and looked straight out on Donegal Bay and across to Sligo and its mountains. 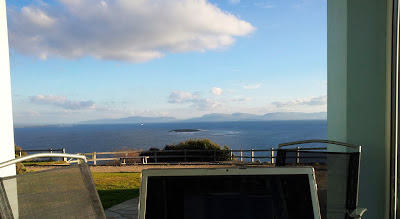 [Photo: the views over Donegal Bay to Sligo, from my outdoor 'office']

My wife – and our dogs to a lesser extent – are well aware that any holiday in Ireland comes with golf attached. We arrived on a Saturday evening and on the Sunday we were heading north to Narin. There’s a beautiful beach, I promised… one that just happens to run beneath the delightful Narin and Portnoo Golf Club. The course’s dunes stretch across the landscape as the R261 from Ardara dips down into the village. It is a beautiful spot, but the club does not help itself because golfers will be somewhat bemused as to how to reach the links. The course is accessed through the mobile home park by the beach, but visitors may be put off by the ‘Private Property’ sign that greets them at the entrance to the park. 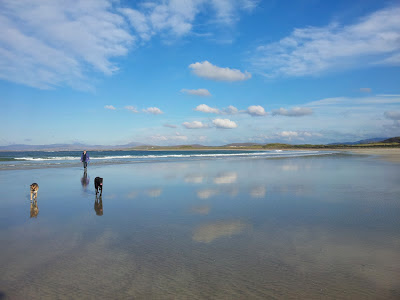 [Photo: Narin’s beach curves in an S-shape that wanders right beneath the 15th fairway (in the distance)]

Still, once through, it was great to see the recent clubhouse additions, with the glass front to the bar/restaurant offering more space and views over the 18th green and 1st tee. The club has had a difficult year with the death of Connor Mallon, the Club Pro, but the course remains as mesmerising and intriguing as always. I love this place and I got quite a buzz when I picked up the club’s leaflet to discover a quote from Hooked was being used on the inside pages, alongside one from David Owens, the Golf Digest writer.

[Photo: a panorama from Narin and Portnoo's 7th tee box]

The day was as perfect as you can ask for on a links and after a clubhouse lunch it was off to enjoy what I still consider to be the most exciting run of golf holes on the island – starting with a par three on the 7th and ending with the par three 11th.

I will always recommend Narin and Portnoo to golfers contemplating a trip to this part of the world. The views of Donegal’s mountains, beaches, ocean and solitude make it all the more embracing. Perhaps David Owens sums it up best:

“I set a record for… saying ‘wow, great hole’ every time I opened my mouth.” 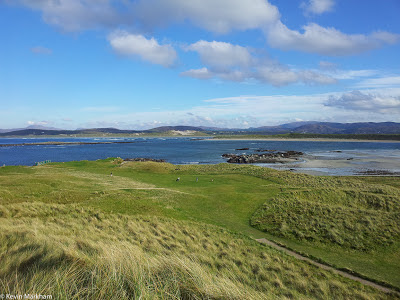 [Photo: the stunning 8th hole at Narin and Portnoo]

For a full set of Narin and Portnoo photos, click here

Donegal Golf Club came a couple of days later, after a trip out to the Slieve League cliffs – some very under-appreciated and strikingly under-marketed assets in Donegal’s scenic arsenal – Glencolmcille and down to the rocky tip that is Malin Beg.

The day started promisingly enough, sunshine lacing the scenery with light, but by the time we reached the golf club it had turned a muted grey that did the course no favours… especially after the colourful drive that slides through the woods which stretch across the neck of the Murvagh Peninsula. At the end, you reach Donegal’s clubhouse, the only building on the peninsula. 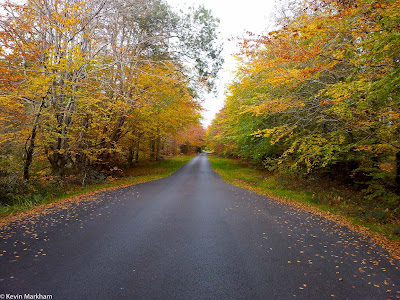 [Photo: the drive in to Donegal... it goes on for quite a while]

Donegal, or Murvagh, is well known for its length but the run of holes by the sea will impress anyone. Starting at the well-named par three 5th ‘Valley of Tears’, you are taken on a thrilling run pressed tightly to the rolling dunes that separate land from sea. On the 7th and 8th you walk up onto the dunes so you can see all around you. It’s an inspiring sight, grey skies or not. 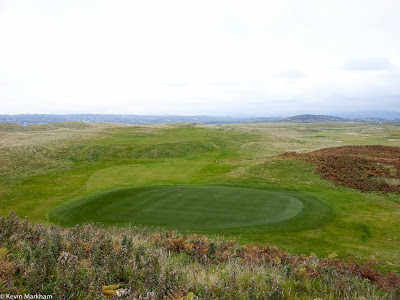 [Photo: view back down the 7th from the high 8th tee box at Donegal]

Time and again I have been told that Cruit Island Golf Club deserves to be in Hooked.

“It is the most beautiful spot you could imagine,” Ronnie, one of my regular golfing partners, told me.

It is, unfortunately, a nine hole course and therefore fails on the most basic criteria to make it into the book: it has to be 18 holes. That didn’t mean I wasn’t going to visit it when I was so close (to be reviewed on this blog in due course). We set off north again, passing Narin along the way, only to be stymied outside Dunglow by a maze of roadworks. A new road was being built across the bog, which involved two sets of lengthy traffic lights and a specially built diversionary road. Now, if only the roads in these parts were as good as the diversionary road, we’d have reached Cruit Island in no time. As it was, once we reached the island, the drive across it went on and on, bringing with it a sense of remoteness that only added to the anticipation. And it was worth the wait. You drive across the 1st hole on your way in, and you know something special awaits. Take a look at these photographs and you’ll see what I mean. Here’s the 6th, which has to be one of the best holes in the country. 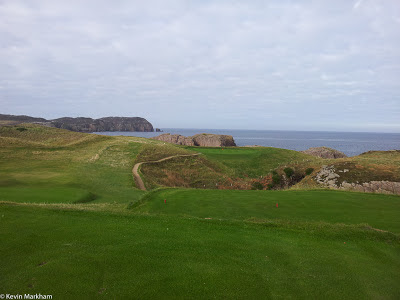 After I walked off 9, I met Jimmy, the Manager.

“What did you think?” he asked.

I was in awe of the place. It may only be a 9 hole course, but try telling that to holes like 3, 5, 6 and 7 which would sit comfortably on any of the world’s best links courses. It is utterly natural, entirely unassuming and there are moments when your breath will be taken away.

“You know that American fella who walked around Ireland? Jimmy asked.

“Yea, him. Now all the Americans who come here stop for ten minutes on the crest overlooking the 3rd green to have their photographs taken.” 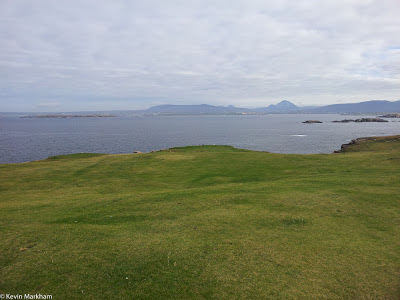 [Photo: the drop to the 3rd green at Cruit Island]

And it’s no wonder as the views stretch over the sea to Gweedore, with Mount Errigal grabbing most of the attention.

There is a possibility that some land next to the opening hole, on the south west side facing Aran Island, will come up for sale in the near future… if a new 9 new holes were to be built, and they were as good as the existing 9, then Cruit Island would comfortably be up there with the best of them. Time – and money – will tell in this remote, beautiful spot.

But even as a 9 hole, this brings Donegal’s links count to 11.

My wife – and dogs – had one more visit to endure. As we headed home, we called into Bundoran Golf Club. I wanted to meet Noreen, the General Manager, to ask a few questions for an article I’m writing on the West Coast Challenge. It was bright and sunny, and for a weekday the course was buzzing. As was Noreen’s office: in the wind the office door sang like an angry wasp the entire time I was there. She barely noticed.

Photos of Bundoran are here. 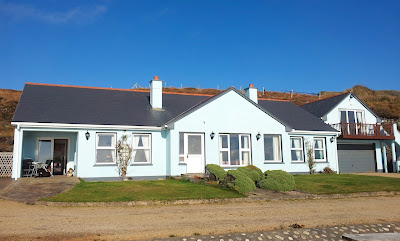 Six days, four courses… not bad for a family holiday!

If you like the look of the house we stayed in, check out Imagine Ireland.

If golf books are more your thing, then Tom Coyne’s adventure is told in a book called ‘A Course Called Ireland’; mine, if you don’t know, is called ‘Hooked’.