Someone left a comment on my PowaKaddy review (conducted at Royal Porthcawl) that they were rather hoping for an appraisal of one of Wales’s greatest courses instead. First of all, I am writing a piece for a golf magazine on some Welsh courses and I didn’t want to give too much away, and second, if there is a finer course than Royal Porthcawl in Wales, I want to play it.

Royal Porthcawl is a slice of heaven… or maybe that should be a hook of heaven, since almost every hole that isn’t straight is a hole that moves from right to left to some degree. From that perspective, my game is ideally suited to a golf course that hovers above the beach on the edge of a small seaside town. It is very much like Ballybunion or Lahinch in that regard. The day I played, surfers were stacked three deep on the waves in front of the clubhouse, with more trailing like ants across the sand to join them. 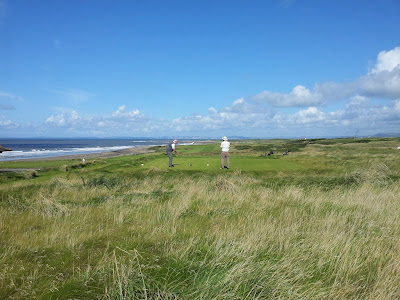 [Photo: teeing off on the 1st hole]

The clubhouse is old, looking like a worldly-wise gentleman keeping his feet raised out of the water. It is brown and red and is one of those wonderful, cosy places that can keep you all day… at least until you get one look at the 1st hole. Straight, tilted, littered with bunkers, the view from the tee is exhilarating. You hit over the 18th fairway, but this is the only crossing on a course that is well spaced out and promises views of the sea from every hole. The views elsewhere might seem marred by the smoking stacks or nearby Port Talbot to the west, but there is a certain perverse beauty to the white towering plumes reaching for the sky.

Royal Porthcawl tests every facet of your game, but it will be your patience it tests most of all! A second’s loss of concentration could cost you… anywhere, so patience is the only way to play this links beast. 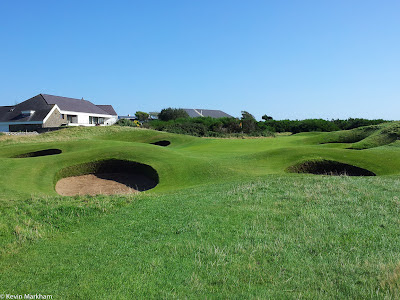 [Photo: the bunkering around the 7th green]

The greens are things of beauty and terror. Surfaces sweep and slope and there are few straight putts. The 7th is Index 18, a short par three at the most inland part of the course, but leave yourself more than 20 feet away and you’re looking at a double break. Of course, if you’re like me, you’ll avoid that problem by missing the green altogether – and if you avoid the impressive nest of bunkers that encircle the putting surface then you might even manage a par. 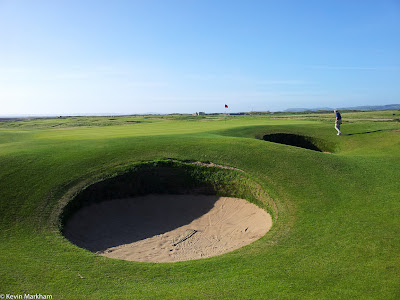 [Photo: this bunker used to be about three deeper. As you can see, it's almost too easy now!]

The bunkers are simply not to be messed with. They are numerous, deep, tall-faced and occasionally hidden. In some places, I was told by my playing partners, they are considerably shallower than they had been (see photo). That’s a terrifying thought when you have these deep pits pointed out to you. Their positioning – while not exactly cruel – will punish poor shots… and weak shots particularly. Royal Porthcawl demands that you play golf, encourages you to be brave and rewards you accordingly. Indeed, some of the areas behind the green that used to be a tangle of rough have been replaced by fall-offs that at least give you a chance to recover. On some holes here (the 4th and 9th for example) a weak shot can roll off the green and come 20 yards back towards you. 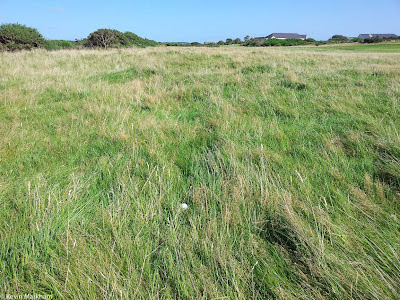 The rough was particularly deep when I played – the weather has kept it long, with the rain making it impossible to trim while also encouraging growth. Balls disappeared in a heartbeat (I lost one on my first shot), but even without it being unseasonably long it can’t offer many opportunities to fire at the greens.

Fairways are perfectly generous, but it does help when you know which side to favour (as if that ever made a difference!). I joined up with John, Peter and Willy on the 9th tee – all members – and discovered I had many more scoring opportunities thereafter, thanks to their advice. Almost every fairway has an angle or bump but, apart from a few tee shots (2, 3, 12, 17), you can always see what awaits. 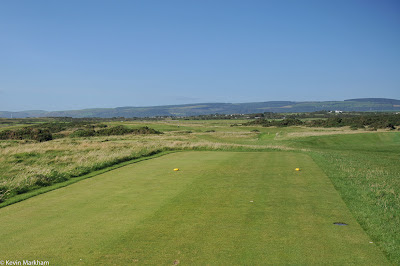 With so much to think about from the tee and on approaches, you will play a remarkable variety of clubs and shots. That makes it interesting from start to finish, but the landscape adds to the enjoyment. The dunes may not be big – as in Enniscrone/Carne big – but there are considerable movements to fairways and you do have to climb a few times during the round, which opens up lovely driving opportunities (9th, 10th, 15th) and tough, flag-in-the-sky approaches (5th, 8th, 16th), or over-the-top drives. It constantly mixes things up, and the routing is intriguing as it links you back in between earlier holes - and yet it always feels spacious. For me, after everything that had come before, holes 15 and 16 (Indices 1 and 5 respectively) were completely unexpected, with steep ridges mid-fairway threatening long drives and potentially blocking second shots. 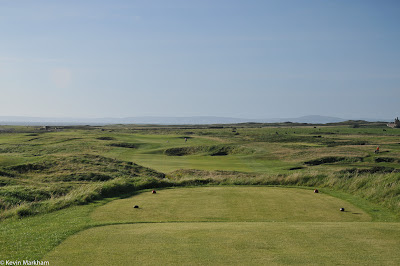 For much of the round, and over-shadowing the clubhouse, a huge old building is visible. This was once the Miner’s Rest Home, where miners came after working in the pits all their lives. It is a big structure, sprawling behind the 1st tee, and it creates quite a silhouette on the landscape. 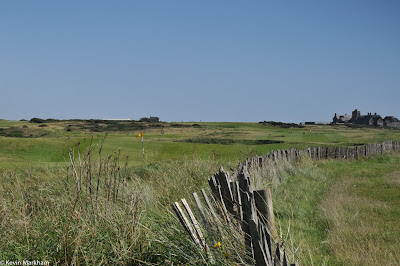 [Photo:  views back from behind the 3rd green - Miner's Home on the right]

John, Peter and Willy are members of the Sparrows Society, a group of golfers who are all members of the golf club. Indeed, it is the only way to become a member of the society. Not that that stopped an American who played with the three boys the week before my arrival. Apparently this American was an avid collector of golf balls from all the clubs he went to, and when he saw the ball with a blue sparrow on it, he wanted one. Not so fast – the balls are only given to members of the Society. If he wanted one, he was told, he would have to join the Society, which meant joining the club… How much, the American demanded and promptly marched off to the club to pay up… or so the story goes, as John was quite happy to offer me a pack of three ‘Sparrow’ balls. 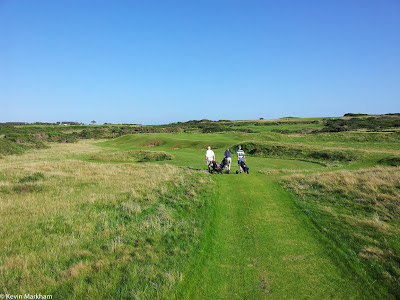 [Photo: the Sparrows head for the 11th green]

One final point: the clubhouse bar is another piece of heaven, looking out to sea and over the old putting green. There’s even a veranda where you can sit out and enjoy your drink and food. If you feel inclined, walk down to the tee box behind the 18th green. This was the 1st tee when the Walker Cup was played here in 1995… and when Gary Wolstenholme famously beat Tiger Woods in the Singles.

And if you're supping a well earned pint, check out the photographs. There's one of the Welsh Rugby Internationals who played against the club in 1908. On the top right of the photo is a severe looking gentleman by the name of Stableford – the man who brought us the scoring format. Perhaps he played here and didn't have the necessary patience, and so invented another way to score on the course.

Royal Porthcawl is in superb condition and my playing companions made this a thoroughly enjoyable afternoon of golf. My thanks to all three and to the club for allowing me to play. 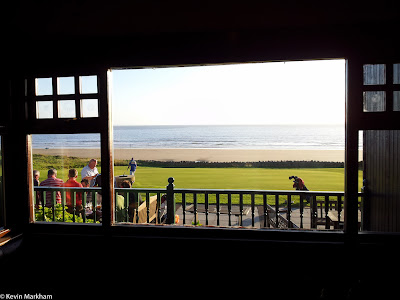 [Photo: clubhouse view... before heading outside]

Posted by Kevin Markham at 7:06 PM