Who Wants to Buy The Belfry?

It's not just Ireland that's struggling with golf course closures and golf course sales: England is enduring some pain too! The Belfry, in the west Midlands, has gone up for sale. This famous resort has three courses and it has hosted the Ryder Cup four times. Back in 2009, it hoped to host it again... in 2022.
All four Ryder Cups (Europe won two and halved one) were held on the Brabazon course, with perhaps the most notable win occurring in 2002, when Paul McGinley sank the winning putt... or was it 1989, when Christy O'Connor Junior beat Fred Couples with his famous two iron shot into the green on 18, sealing Europe's victory? Whichever, Irish golfers clearly like this course. 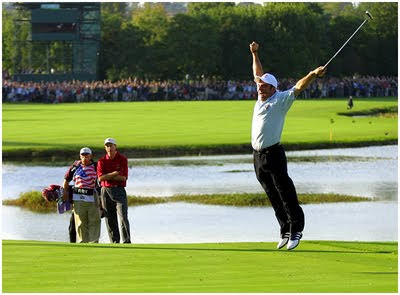 [McGinley's leap for joy on the 18th. Copyright PInglis]
25 major tournaments have been held here over the years and millions have been invested in upgrading the course and facilities. Now, in the face of being put up for sale, is it all for nought? Time will tell, but Irish golf courses, resorts and developers can at least relax, knowing that Ireland isn't the only country struggling...
... but wait a minute... that looks like a very familiar name at the top of the 'leader board'. Sean Quinn, once Ireland's richest man, bought The Belfry in 2005 for the best part of Stg £190 million. Perhaps Paul McGinley's winning putt had gone to his head, but he bought the resort with great ambitions - including knocking down the existing hotel and building a new 500 bedroom, 5 star one in its place. Sean Quinn Jnr is in charge of the resort.
With the property crash and the recession, building that hotel is as likely as a hole in one. Today (according to the Irish Times), The Belfry is valued at £88 million, and the banks which funded Quinn's 2005 purchase - Bank of Ireland and Bank of Scotland (Ireland) among them - have decided that this is the time to sell.
Only time will tell if the Ryder Cup is ever held here again, but at least the Irish Midas Touch continues!
Posted by Kevin Markham at 9:19 AM

Email ThisBlogThis!Share to TwitterShare to FacebookShare to Pinterest
Labels: Ryder Cup, The Belfry