The Dead of Portsalon Golf Club 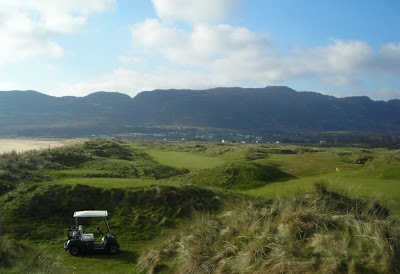 At the end of a hard round, striding over dunes and lapping up exceptional views, you don't really want to be told that there are dead bodies lying underneath your feet on the 18th fairway.

When Donegal's Murvagh course revamped its 1st green a few years back, the skeleton of a woman was discovered in the ground. It was too old to be of interest to the Gardai, and too young to attract the archaeologists, so it was removed and disposed of. A bit of a damp squib really.
What is going on at Portsalon is an entirely different matter. Here we're talking about the remains of 250 sailors, or some of them at least. 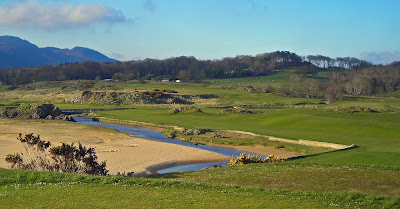 [Photo: Portsalon's par four 2nd, over the beach/Ballymastocker Strand]
200 years ago, on December 4th 1811, the HMS Saldanha sank in a violent storm near Ballymastocker Strand in Donegal. More than 250 lives were lost and it was one of the greatest sea tragedies on those shores. It is thought the ship was trying to return to harbour in Lough Swilly, on the Inishowen peninsula, when she struck rocks near Fanad Head.
She finally ran aground but was so battered by the sea that all lives were lost... bar the captain and his parrot who both survived briefly: the captain, William Pakenham, died on the shore after being given a drink of poitin. The parrot died, a few days later in a local garden. The account says that upon finding a strange bird in his garden the farmer shot it. The parrot was reported to be wearing a collar inscribed with the words ‘Captain Pakenham of His Majesty’s Ship Saldanha’. It was the last member of the Saldanha to perish.
The captain received his own burial plot in Rathmullen Priory burial ground, but many of the sailors were placed in a mass grave, thought to be under Portsalon's 18th fairway, with a massive stone used to cover the bodies. Just how many remains to be seen.
There is no record of the parrot's burial - perhaps it was buried with the captain, or perhaps it became an exotic dinner. 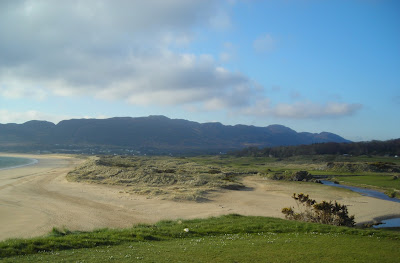 Fanad Head lighthouse was built in response to the disaster and its beacon first lit up Lough Swilly's dark waters on St. Patrick's Day, 1816, five years after the tragedy.

Portsalon Golf Club have been very accommodating: they welcomed a 200th anniversary commemoration ceremony on the 18th fairway and the club has also allowed historians to walk the course, using scanners to locate the bodies.
Over the years bones have been found and, not surprisingly for a county which resorts to poitin in difficult situations, there have been numerous tales of ghostly sailors walking the roads or trying to enjoy a free round on the links.
Donegal County Council plans to erect granite memorials at Portsalon beach and on the golf course... as if a links course didn't have enough hazards already.

One final thought: Captain William Pakenham came from famous Irish stock, but it was his brother-in-law who will be remembered most: he was Sir Arthur Wellesley, who became the Duke of Wellington, victor of one of the greatest battles in history in 1815: Waterloo.

When you play Portsalon Golf Club, you will have your own battles, but spare a thought for all those sailors as you head up the last. And raise a glass of poitin from the warmth of the clubhouse bar.

Posted by Kevin Markham at 8:52 AM