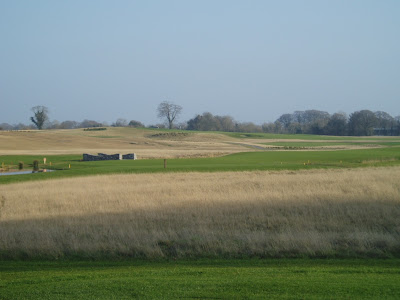 [Photo: views across the course at Moyvalley - designed by Darren Clarke]
First there was Rory winning the US Open (a year after G-Mac), now we have Darren Clarke winning The Open. That's some year for Northern Irish golf. Darren's victory was spectacular - I said to a few people at the start of the week that if the scoring was low and the weather poor then Darren had a real shot... if only I'd had the courage of my convictions and put a few quid on him (150/1 at the start).I suspect Gareth Maybin will be relishing his next competition. After Hoey's win a few weeks back, it seems that being Northern Irish is a guaranteed passport to winning.
I know that Rory grew up playing at Holywood GC and Darren at Dungannon GC, but their names are also inextricably linked to Lough Erne and Moyvalley, respectively... both of which are in administration. 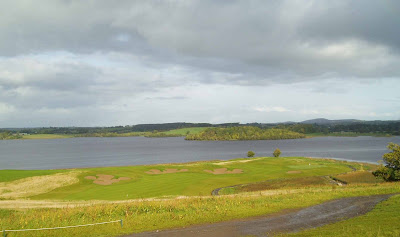 [Photo: views across Lough Erne and the 7th hole]
The management at Lough Erne in Co. Fermanagh, believes that Rory's win will give them (and Northern Irish tourism) a major boost and they have seen bookings increase nicely since Congressional. Most of this interest is domestic - for now - but, no doubt, Americans who were havering over coming to Ireland on a golfing holiday will have been convinced to come on the back of Rory's win, with Northern Ireland a prime target. (Rory is the travelling pro for Lough Erne)
Whether they'll come for the Royals, Portstewart, Castlerock and Ardglass or whether they'll traipse further west to Lough Erne remains to be seen - hopefully they'll do both. Jonathan Stapleton (Lough Erne's General Manager) believes that Rory's win sets "Fermanagh and the North apart as a golfing destination..." Hmmm, Fermanagh is a beautiful county for sure, but that's a bit of a stretch when you consider that the county has only three 18 hole golf courses - two of which are average parklands (Castle Hume and Enniskillen). Lough Erne on the other hand is a quality course and has all the pomp and ceremony to be a major attraction in years to come (5 star hotel, spa and all the trimmings). Its popularity will grow massively with Rory's affiliation, so I hope it will continue to thrive and benefit both north and south. 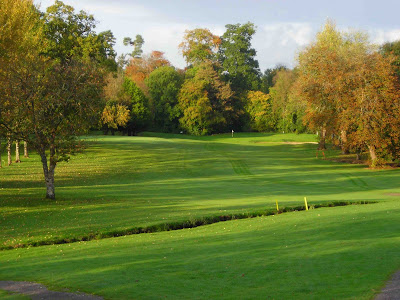 [Photo: approach to the 12th at Enniskillen]
(As a quick aside, it is also not that far away from Darren Clarke's first and impressive design attempt at Castle Dargan). 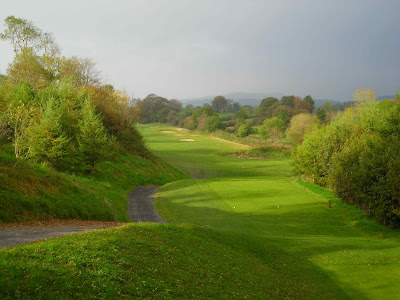 [Photo: the intimidating drive on the 17th at Castle Dargan]
Moyvalley was home to The Champion's Club, and the course was designed by Darren a few years back. It is a rollercoaster of a course and, in my opinion, hugely under-appreciated. It too is in trouble: when it first opened with its air of exclusivity, the joining fee was €75,000. No one took them up on that and, today, there is no joining fee at all - just an €800 annual sub. Since the course is still struggling it will be interesting to see,
a) how the public (local and international) respond to Darren's victory by heading to Moyvalley (and Castle Dargan too), and
b) how the club itself responds to what can only be described as one of the most glorious marketing opportunities open to it.
Time will tell, but it should undoubtedly see a bounce in bookings and interest and I hope it can take full advantage. I wonder if they can lure Darren back for some sort of event, maybe a head-to-head against Padraig Harrington.
Congratulations again to Darren Clarke and Rory and it looks like the Irish Open is going to be one amazing tournament this year.
Posted by Kevin Markham at 6:43 PM