How many Holes in One! 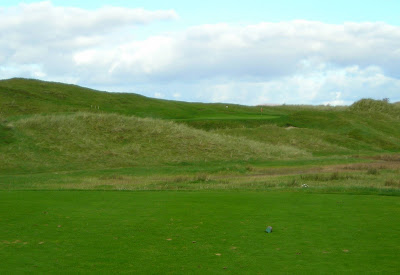 [Photo: Donegal's 'Valley of Tears' Par 3]
It's called the Valley of Tears because it's so tough. But not for Emily McGuinness of Greenore Golf Club. She turned up to play a practice round at Donegal Golf Club (aka Murvagh) for the Lancome Irish Girls Close Championship and proceeded to stun members with an outrageous performance on the dreaded par three. First she took out an 8 iron and knocked it onto the green, watching it roll into the hole for her first Hole-In-One. The men on the 6th tee overlooking the 5th green were, obviously, flabbergasted... but Emily wasn't done. She decided to take another practice shot and pulled out her 9 iron. She smacked it on the green and proceeded to record her second Hole-In-One in as many shots.
Who does she think she is? Christy O'Connor Senior.
Congratulations Emily - hope you keep up the streak.
Posted by Kevin Markham at 6:58 PM