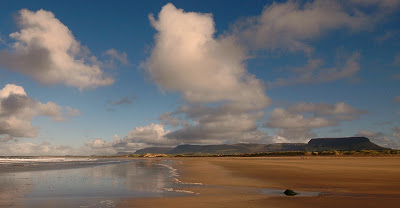 [Photo: Streedagh Strand and Benbulbin]
Castle Dargan (see Special Offer below) is ten minutes from Sligo town, up in the beautiful north west of Ireland. It’s an impressive, elegant hotel with a golf course and Spa. It promises peace and quiet while still being close enough to the vibe of Sligo town and everything it has to offer. This is also one of the country’s beauty spots: Benbulbin rises in the distance, and there are beaches here with barely a soul on them… Streedagh Strand may prove a particular favourite with its endless stretch of sand. And let’s not forget that this is Yeats country: the Isle of Innisfree is in Lough Gill, a few miles from the hotel, and Ireland’s most famous poet was also a frequent visitor to Castle Dargan, waxing lyrical over the mystical setting and the estate’s crumbling castle poised on a rocky outcrop above Lough Dargan. 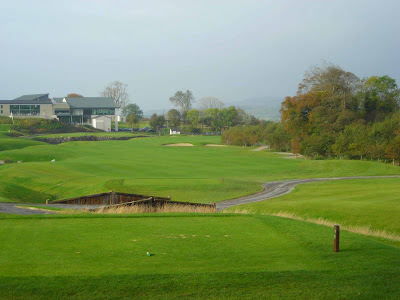 [Photo: the 18th with some of the hotel on show]

The golf course, in case you didn’t know, was designed by Darren Clarke. He has so far been involved with five different courses – two in Ireland – but this was his first venture. There will no doubt be many more, now that he’s a Major champion. They’re unlikely to be built in Ireland, the UK or US, but Russia and China are building hundreds.

I liked the golf course. Darren has emulated the magnificent rolling terrain and the old stone walls, to create something that fits easily into its surroundings. It opened in 2006 and it is rugged and peaceful. And yet the lay of the land also has an eerie feel to it… a bit of Wuthering Heights perhaps. The greens were superb when I played. True, it’s possibly on the short side for a par 72 (6,400 yards from the whites or 6,240 from the greens) but that makes it all the more accessible for golfers of all abilities. There’s also enough water to hold big hitters in check, with a lake in the centre of the course affecting several holes. And then there are the ruins of the castle which you encounter on holes 2, 3 and 16. 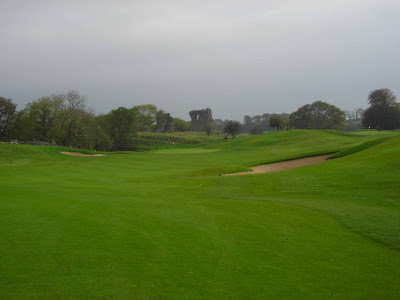 [Photo: approach to the 16th with the castle ruins behind]

The hotel is an excellent base from which to plan your golfing (or family) holiday. Golf on your doorstep is a rich reward at Castle Dargan, but you can also strike out to the acclaimed County Sligo Golf Club at nearby Rosses Point. It is a links to be reckoned with and one of the best in the country. On the other side of the bay is Strandhill Golf Club. It is another links with some of the most thrilling and quirkiest holes you could ever hope to encounter. (The popularity of surfing at Strandhill must also be mentioned, and you get a great view of the sea and the surfers from the 7th tee.)

Further away, but still worth your money, are Enniscrone to the west (50 km) and Murvagh to the north east (75 km). They are both links of considerable standing. Or, if you want to follow the ‘Major’ trail, drive east for 70 km and visit Lough Erne, where Rory McIlroy represents the resort as its travelling professional.

Back to Castle Dargan: the hotel is a new creation, with only 30 or so bedrooms, ranging from en suite guest hotel rooms to Wall Garden suites. It’s a four star hotel, intimately linked with the estate’s old house which also boasts four magnificent Castle Dargan House suites. In other words, there is lots of choice depending on your budget, But there’s more: the 170 acre estate also has a number of serviced self-catering apartments and private golf lodges.

Away from the course, there is the unique golfing academy, made up of four par 3 holes, each a recreation of a famous par 3: the 13th at Carnoustie; the 8th at Royal Troon; the 13th at Muirfield; and the 15th at Turnburry. It’s an interesting touch.

You'll nearly always find some sort of special offers on accommodation and golf at Castle Dargan: simply call Castle Dargan hotel and ask what deals they have going. At the moment it's 2 nights Bed & Breakfast + 1 Evening Meal + 1 Round of golf for €159.00