I've never really used this blog to have a rant... but just this once!
Michael O'Leary, you're full of crap. You lambast the government for their airport tax (a valid point, I might add), claiming it is a core reason why tourists aren't visiting our country... and yet you charge golfers €80 to carry their clubs on Ryanair. With your 'cheap seats' policy, a golfer can purchase a return flight for a quarter of that price.
Actually, I'll aim that same invective at Aer Lingus, who jumped on board the bandwagon very shortly after Ryanair introduced their fees. 'No, no, no,' said Aer Lingus, 'we're not going to be another Ryanair...' and then they go and do everything exactly the same as Ryanair. What a stunning business strategy that is!
The thing is, I really admire O'Leary. The ballsiness and brass-neck of the man is outstanding. He doesn't take lip from anybody and I imagine he'd be a great bloke to have a drink with. But he does splurge a load of rubbish on why more tourists don't come to Ireland and how Ryanair are doing everything they can to attract them. If that's the case, you wouldn't make the following pig-ignorant reply to a tour operator's criticism about the checked baggage charges applied to guitars and golf clubs:
"Maybe if you're a guitar playing golfer on the doss, you're not my market. I don't give a shite."
Thank you Michael. Now here's a picture of one of your planes taking off beside Shannon Golf Club. You know where you can shove it. 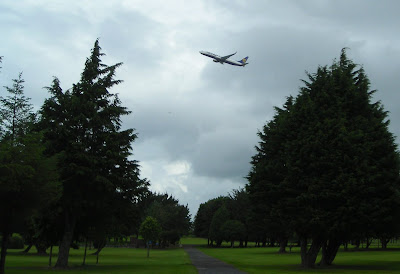