The second round of golf for dad and I was at County Sligo Golf Club, or Rosses Point. It was only after I’d finished the book and looked back over the scores that I discovered Rosses Point was the highest scoring course. 97 out of 100.

People automatically assumed that this made Rosses Point my favourite course. It is one of my favourites, for sure, but whether it holds that top position would require me to play probably a dozen links and a couple of parklands all over again. I will do so willingly, but what I love about Rosses Point can be summed up in one word: change. 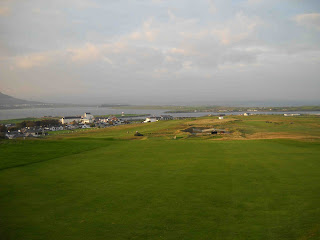 [Photo: views back down the fairway, towards the clubhouse, on the the par four 2nd]

Our tee time was at 9am, playing in an open singles for €25. Consider that a bargain, and if you arrange your trip here and are canny enough, you’ll discover similarly priced opens at Strandhill and Enniscrone.

We arrived early. And just as well. At 8am there was a large bus in the car park and golfers milling about. The cold fear of being held up by Americans washed over me. It is a generalisation to say that Americans are slow golfers, but they are here to enjoy the best links golf in the world so it's no wonder that they take their time. And it was great to see them on courses like Rosses Point, Strandhill and Enniscrone in October. The slow round wouldn’t have mattered too much but we had a tee time at Lough Erne, 50 miles away at 2.30pm. I legged it into the pro shop and queued behind two Americans. 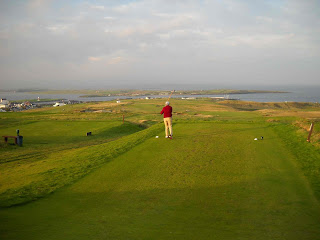 [Photo: the par five 3rd drops down over ridges and bumps and bunkers, curling left towards the clubhouse]

I asked them where they were playing on their trip. Rosses Point was their final round and they’d played The Island, Portmarnock (old), Royal Dublin and somewhere else. They couldn’t remember where they’d played the previous day. Hmm, not exactly memorable then! A third member of the group arrived and ‘remembered’ Donegal Golf Club. I'm sure they won't be best pleased to know that they'd been forgotten so quickly. 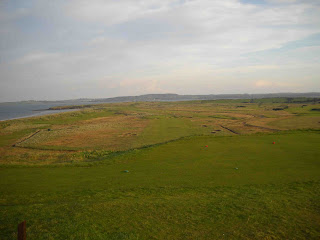 [Photo: the par five 5th drops onto a flat fairway well below the tee, showing off the distant and glorious views all around.]

When I got outside, I held some hasty negotiations with the Americans and they were kind enough to let us out ahead of them. It helped of course that we were in a buggy. It was 8.15am. And by 11.15am we were back in the clubhouse. In between we had a great round of golf, switching between the different styles of hole and absorbing the views that make Rosses Point such a great golf experience. We met three more Americans on the par three 4th tee who, like ourselves, were avoiding the busload of their countrymen. The 4th was being hollow-tined so we had time to chat. They were playing early as they were heading off to Donegal Golf Club (they remembered the name too) and despite being a three ball, they easily stayed close behind us for the rest of the round. making a mockery of my earlier generalisation. 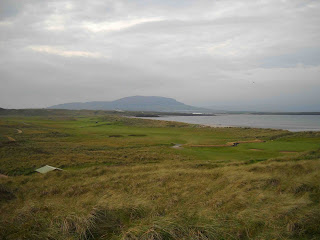 [Photo: the homeward stretch viewed from the 9th tee, starting with the par three 13th green on the right]

Where Strandhill is dynamic, amusing, unexpected and infuriating (in a good way), Rosses Point has that dramatic quality that runs through the soul of links golf. The constant changes that demand you to switch gear, the deception, the distraction of the views and the run for home that takes you in one direction from holes 14 to 18. We had the wind against us, which is the whole point of that closing stretch, and low punched shots were prayed for on every blow. Dad used his driver off the 16th, a par three of 172 metres (white tees) and put it pin high, 20 feet from the hole. It was remarkable watching the wind pull and snap at the ball in flight. It stayed true and it was his best shot of the day. 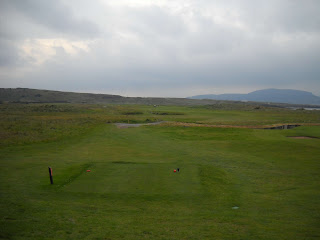 After a great start, I had started to struggle. If you asked me at the start of the year: ‘before you start your swing, what do you look at?’ I wouldn’t have been able to answer. I can’t remember if I looked at the ball as a whole, or the back of the ball. But a couple of months ago I started looking at a spot on the ground just underneath the ball. And now I suddenly find that mid swing my eyes look at one spot and then another. You won’t be surprised to know that I then duff it all of 10 feet. It happened on the 16th from 15 yards left of the green. It’s as frustrating as hell.

We did manage to avoid some other frustration though: we teed off on the 15th, standing on the edge of the sea. As we watched, the final of the three groups of Americans were teeing off on the 7th alongside. One thing is for sure: we would never have reached Lough Erne if we’d waited for our official tee time. As it was, I’m guessing we were having lunch in Lough Erne’s clubhouse by the time the Americans finished.

Thanks to David O'Donovan, the club's Director of Golf. And thanks for the directions to Lough Erne - via Ballyshannon if you're planning a similar trip.