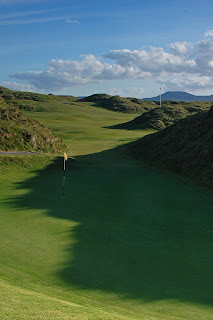 [Photo: view back up the fairway on the par four 13th]
A while back, on boards.ie, the question was asked: ‘who would be your dream fourball?’

The usual answers flowed in: Tiger Woods, Rory, Jack Nicklaus, Hogan… Then some stranger ones crept in: John McEnroe, Obama… and finally came the most poignant of all: ‘My dad’. This came from a lad whose dad was no longer around and he was regretting that he hadn’t played with him enough.

I’m very lucky to have a fit and healthy dad of 79, who still plays golf twice a week. On Saturdays I get to play with him from time to time, and this year we got to the semi-finals of the Father & Son at Greystones (we lost on the 19th, if you’re interested). But he mentioned once that he and his father went away together to play golf for a few days, so I decided we should do the same. 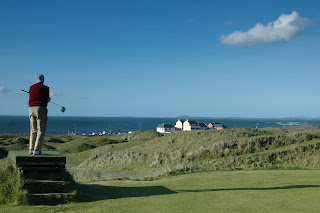 [Photo: dad watches the Americans on the par four 13th. Rosses Point is over the water.]

I planned the trip – it was not a difficult decision choosing where to go. I picked my favourite corner of the golfing planet: the north west, with golf to include Strandhill, Rosses Point and Enniscrone. As it turned out, we got to sneak in another 18, at Lough Erne.

But Strandhill was first on the list. We left Dublin at 10am and were in Strandhill a little under three hours later. Declan Basquille, an ex-captain of the club, had arranged complimentary green fees for us, and after lunch in the bar (€10 for two courses – not often you get value like that these days, and the grub was good) we returned to the car to get our clubs. We passed a young lad – twenties probably – opening his boot. I glanced in: golf clubs and surfboard. Now that’s what I call surf and turf. Strandhill is renowned for its surfing and you get to see plenty of the waveriders from the 7th tee. Perhaps a few holes of golf was the perfect warm up for an evening’s surfing on the Atlantic. 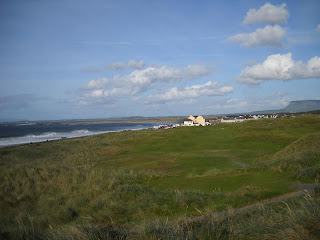 [Photo: the par four 7th and the surf alongside. Benbulbin in the distance]

Strandhill is a links course that doesn’t like to make life easy. There are elements that you might call rustic (uneven tee boxes), unkempt (some fairways/paths) and insane (several holes), but these all add to the charm of Strandhill. No pretensions, no standing on ceremony and one brilliant course that can surprise you, delight you, terrify you and thrill you at any given moment. The fairways are a riot – literally – and nowhere moreso than on the 5th hole. Rollercoaster is the only word that describes it. There are plenty of blind or ‘impossible to gauge’ drives (the 13th remains one of the most memorable and remarkable holes I have ever played) but it is such an adventure that you don’t mind the chaos that can follow a great shot. That’s shorthand for saying that great shots don’t always get the reward they deserve.

I hit a drive on the par five 5th that appeared nowhere near where we’d seen it land. I then punched a 7 iron over the sea swell of dunes that hid the green entirely and couldn’t find the ball anywhere. It finally appeared in the rough behind the green. A drive and a 7 iron and I’m over the back. Just crazy. Dad lost three golf balls, each of them after a perfect shot. It was all part of the Strandhill adventure and we were playing with a stiff breeze that was getting stiffer by the minute.

I guess the seal of quality for a links course comes with the arrival of the Americans. And we had two fourballs on the course. We caught up with them on the 12th (they started 90 minutes ahead of us) and we went so slowly thereafter we almost went backwards. They didn’t have caddies and on a course like Strandhill that’s suicide. It’s not long, but if you don’t figure out what’s over that dune or beyond that rise, you’re in deep trouble, and these guys were heading off in four different directions from every tee box. 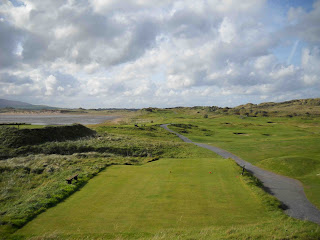 We were waiting on the par three 14th tee, waiting on the Americans and watching two lads putt out on the 7th green alongside. We passed the time of day and then one asked: ‘is that a three or a four club wind?’ It had picked up considerably, and after some debate we agreed it was four. I looked at the five iron in my hand and went back to the bag for my four. The hole is 125 metres, normally an 8 iron for me, but we were hitting straight down the throat of the wind, so I gave the four iron the best I had. Straight at the flag the whole way, the ball landed two feet left of the cup, pin high. My unofficial caddie had moved on by that stage, so I couldn’t thank him for what was one of the best and truest shots of my life.

I missed the putt.

For anyone who wonders how much I like Strandhill, the photo on the front of my (golf) business card is a view back down the fairway of the 5th, over the most sensuous rolling dunes I’ve ever encountered. Here’s another view of it, taken from the 15th green. 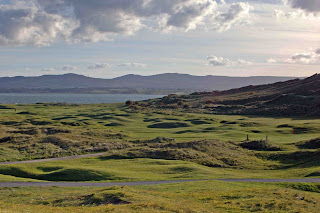 Thank you Declan, and Cyril in the pro shop, it was great to re-acquaint myself with the rugged brilliance of your course.

Posted by Kevin Markham at 1:24 PM