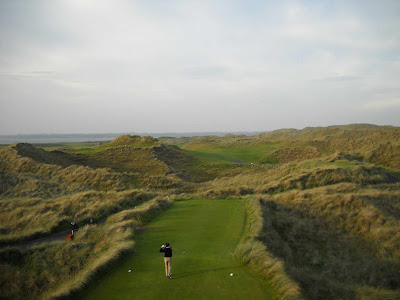 [Photo: View of the par five 4th]
It was a nice touch. Pat Sweeney, Enniscrone’s General Manager, had turned the all too abused golfing cliché ‘risk and reward’ on its head. And aptly so. Enniscrone is a beast of a links course and one of the finest in this country. Remarkably, after being awarded Golf Course of the Year a couple of years ago, Enniscrone still remains one of the best links that people don’t talk about.

The two puregolf2010.com travelling Kiwis had Enniscrone on their original schedule, but let it go as they decided to play Ballyliffin’s two courses instead. I like both Ballyliffin courses well enough, but not compared with Enniscrone. The size of the dunes, the routing of the course, the imagination required on each hole – it all adds up to one of the most enthralling rounds of golf you’ll play. Jamie and Michael missed a beauty.

Once again Dad and I arrived early and got onto the course well ahead of time. And the sun was out which seemed a good omen for our final round. With dunes this big and the wind sending coils of patterns through the marram grasses, it was like playing through a living, breathing thing. 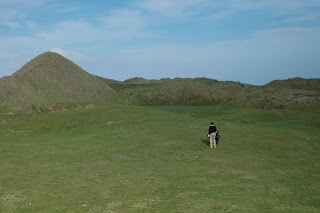 [Photo: Dad ponders the approach to the 12th]

Dad had never played here, so I kept my mouth closed about what was to come – apart from giving him a line on the blindish holes (2 and 4, and later, 12 and 13). I wanted him to enjoy everything as it arrived. After some distinctly poor golf the previous day, his game picked up after the 2nd. He birdied the par three 3rd, sinking a putt of well over 30 feet, while I was stuck down the back and was lucky to stay on the green with my recovery. If there’s one simple lesson to be learned about Enniscrone, it is not to go off the back of the greens. There is no room and no relief. After the 3rd, dad added a run of pars and bogeys over the following holes to put a smile on his face. Risk and reload… not something my dad does and his sensible play reaped the rewards he was due. It was a great way to finish, and into a strong headwind he almost got his four on the 429 yard 18th.

Enniscrone is not a course to blaze away at. Positioning off the tee is paramount. Take the 15th which is Index 1. Your shot has to be to the right of the fairway or else you see nothing of the green and going for it in two is suicide. 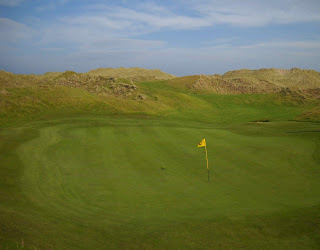 [Photo: view back up the 13th fairway]

Something I alluded to in an earlier blog was a forthcoming book by a gentleman named Craig Morrison. He is producing a book on the 18 best holes in Ireland. He’s already done a similar book for Scotland, and now he’s decided Ireland deserves his full attention. He’ll get no argument from me.

Picking best holes and best courses is always a tricky proposition. I picked Scrabo in County Down as having the best opening hole in Ireland (I still think so), yet a journalist who reviewed my book said that the 1st wasn’t even the best hole on the course. 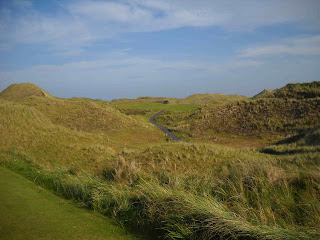 And so it is with Craig. He has picked Enniscrone’s par five 16th as one of the top 18, yet I would put holes 12 and 13 ahead of the 16th. The 12th is simply magnificent: Cnoc na gCorp (Hill of the Dead) is a perfect description for the terrifying second shot you will face, but the hill that the name refers to is the monster dune that rises to your left and reaches some 80 feet high, stretching on and on into the distance. Why is it known as the Hill of the Dead? According to Pat, some 1500 years ago when the Vikings landed, they tried to come inland through the dunes. The natives were waiting and slaughtered them all, burying the bodies under the dune. A great story and one to keep visitors intrigued and aiming ever further right. 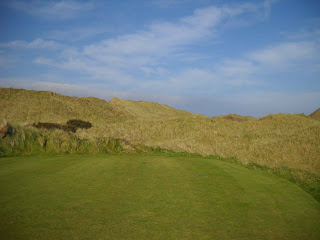 Pat had a heap of stories about the course and I particularly liked the one about four Swedes who took out life membership and now keep their clubs in the top of the clubhouse so that they can come back whenever they want for a few rounds.

Enniscrone will never bore you, crammed as it is with its complex and myriad challenges, its views and its beauty. You will not beat this course, of that you can be sure, but you will be happy to keep trying for the rest of your life. As we left and said our goodbyes to Pat, Dad picked up a leaflet promoting the Atlantic Coast Golf Challenge – a tournament in July 2011 that covers Carne, Rosses Point and Enniscrone. “You up for that?” he asked. I’m guessing that will be his 80th birthday present. 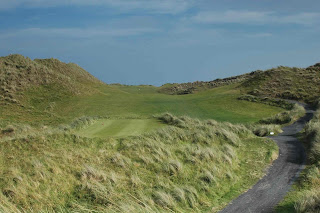 Thanks Pat, and good luck with the Eddie Hackett golf tour. No better way to promote the man’s genius.