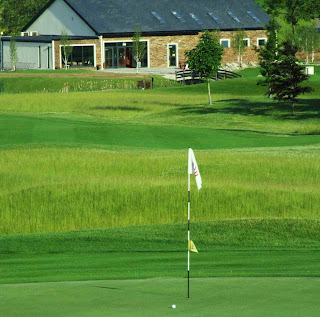 [Photo: the new clubhouse - and a good view of the fescue grasses]
The trials, tribulations and triumphs of Ireland’s new generation of golf clubs continues. That mass of courses built during the late 1990s and early 2000s was always going to be under scrutiny once the pressures of the recession took hold. The Heritage, Moyvalley and New Forest have recently been added to the list of courses in deep trouble, but there are successes too. Concra Wood recently opened its glamorous new clubhouse – to very little fanfare I might add – and Dunmurry Springs has done the same.

When I visited the County Kildare club (www.dunmurrysprings.ie) in early 2008, the club had only been open a couple of years. The clubhouse was a concrete shell and the facilities were located in a stretch of pre-fabs at the back of the parking lot. That said, these facilities were better than some other clubs I visited. But a club can’t operate to its true potential without a clubhouse where golfers can relax before and afterwards. 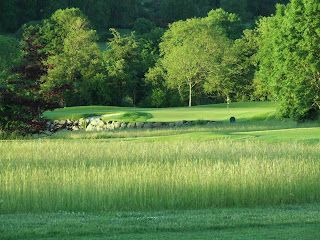 The course is well liked by contributors to www.boards.ie and the question ‘has the clubhouse opened yet?’ appeared constantly on threads about it. Now that it has, hopefully more golfers will visit this fine course. It’s a sweet design, by one of my favourite designers (Mel Flanagan), with three tees: two short and one long. I played the short version (white tees 6096 yards) in March 2008, but I plan to go back and play off the back tees later this summer (blue tees: 6757 yards). They are completely different tests of golf, so choose your tees wisely.

They have proper fescue grasses here: if they’re up then getting stuck in the rough will be a nightmare, but if they’re short it’s a relaxing and enjoyable ramble up a gentle hillside (for half a dozen holes or so) with mountain and countryside views for almost the entire round. The club boasts that you can see seven counties from the 6th green. It’s not hard to see why – it feels like you’re looking into Ireland’s soul – and the view from the 15th stretches down to the clubhouse, and the mountains beyond, taking you all the way home. 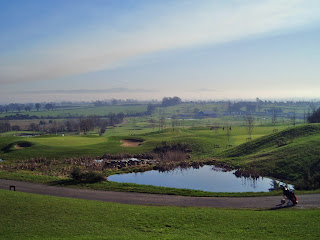 [Photo: the view from the 15th tee takes in the run of holes back to the clubhouse and the distant mountains beyond]

If you want to find out for yourself, I suggest you get up there for their Open Week, between July 22nd and 26th. And, if you want to go the extra step, you can pay €1,000 which buys full membership and the Annual Sub for the rest of the year. It’s worth noting that the club is just 30 miles from the Red Cow roundabout on the M50.

Green fees vary from €25 to €50, but there are Open Singles events every Thursday for €20, which is a price that’s hard to beat. 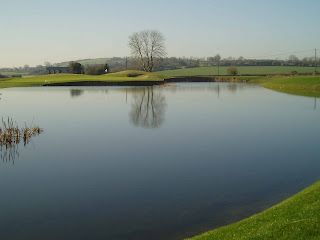 Posted by Kevin Markham at 9:54 PM