Is that your ball?

If you had 125,000 golf balls what would you do with them? You’d give them away wouldn’t you! Perhaps you’d give six balls to all of your friends, family and business customers and colleagues… all 20,833 of them. Or, if you’re feeling generous, you’d give 12 balls, which means you only have to find 10,400 people. Think about it for a minute and work out how many people you know – I doubt it adds up to 10,400.

So the discovery at Anglo Irish Bank that €208,000 was spent on golf balls over a three year period, raises a number of interesting questions: ‘who got all of these balls?’ and ‘who gave all the gear away?’ being the obvious ones. And judging by the amount of money spent on umbrellas, jumpers, sports bags, iPods and all the rest… (adding up to €700K) there are a few folks out there with a lot of Anglo paraphernalia… although many of them may be too embarrassed to wear it now. 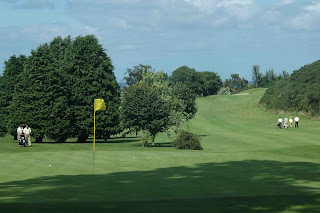 You see, Sean Fitzpatrick is a member at my home club. Not that he’s been seen on its fairways you understand – either he’s too afraid to show his face or else he’s got lost in the gorse looking for some of those 125,000 golf balls. I imagine he’s running a bit short now (no pun intended).

Since Sean fell from grace, the stories have been doing the rounds at Greystones GC. I cannot verify these so I shall not spill them here, but I imagine if you go foraging in the rough and trees and waters of Druid’s Glen you might find a ball or two with Anglo Irish Bank on it. Or an umbrella or golf shoes or…

There is a different perspective to be taken on this: big companies want to ‘thank’ their best clients (Fianna Fail and developers at the Galway Races come to mind), so money is spent to entertain them. Golf is always at the top of the entertainment list and golf balls and umbrellas are the most obvious ‘freebies’. Anglo has been given a roasting over their expenditure, but I have more than a few of these freebies in my bag, from AIB, An Post, Deloitte… I used to work at Esat Digifone (now O2) and An Post did a big day at Mount Juliet that included a waterproof outfit, golf shoe bag, umbrella and balls and tees. And I shouldn’t forget the Mars bar. It all adds up, although not to €700K. Then again, An Post weren’t handing out Pro V1s. 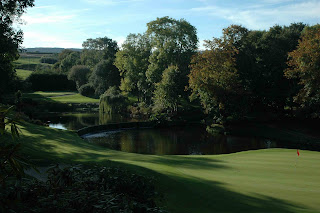 To be honest, it’s all very unfair to be pointing fingers at Anglo and Fitzpatrick. After all, there are still 1,000 golf balls left, and by playing at Druid’s Glen at least Sean is showing he appreciates quality.

Posted by Kevin Markham at 3:00 PM