"It was a dark and stormy night," wrote Snoopy. Standing on the first tee at Greystones, I knew what he meant. It was 5pm and the clouds had that malevolent look, but my buddy, Fin, was over from New York and we had found a time that suited us both.
By the way, the photograph of the 1st was from the Barton Cup match a few days before - it didn't look anything like this last night.

We were joined by Dave, Finbarr's brother-in-law 1, and Stevie, brother-in-law 2. I hadn't seen Dave since Finbarr's wedding, eight years before. He's all grown up now, dresses well and has his own golf clubs - even if he steals Fin's golf balls and 8 iron on occasion... not bad for a barrister, I guess. We were playing skins - 2 cents a skin! Let's be fair, barristers, accountants and traders aren't exactly rich you know.
Stevie joined us on the 4th (he'd come from work), just as the rain that had been lurking all afternoon decided to give a full frontal assault. Of the four of us, only two had umbrellas and only two had waterproofs. Regardless of the 'loaves and fishes' divisions, someone was going to get wet. And it wasn't going to be me - I had an umbrella and waterproofs and guarded them jealously - besides, we were playing for money; any advantage was important. 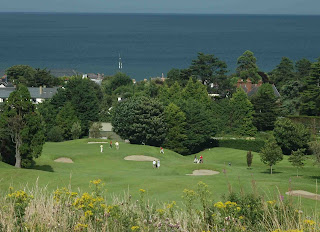 A brief word about Stevie: he's young, he's built like a tank - when I say his arms are bigger than my thighs, I'm not joking - and he hits the ball as far as anyone I've seen. I hit a 5, he hits an 8 - that sort of difference. My advantage is that the ball usually goes almost straight, whereas he can send nearby villages running for cover. So when he stood on the 8th tee (see photo, again from the Barton Cup, as by this stage you couldn't see the green), with the vista of the Irish sea ahead and the green far below, you knew the ball was going to take a battering. Sure enough, the ball was launched, and the tee smashed to little pieces. "So much for 'unbreakable tees'," quipped Stevie, as the ball headed towards Dalkey, 20 miles to the north. He ran out of unbreakable tees shortly thereafter.
As we played into the 8th green, Fin found himself blocked by three cherry trees, that sit between holes 8 and 9. He played a low running shot that cracked straight into one of the trees. He had to jump to get out of the way of the ricochet. I turned to Dave, as we chuckled at such terrible misfortune. "At least he won't do that again," I said. And sure enough, Fin didn't. He missed that same tree and hit the next one instead, once again diving to avoid a hard white object heading straight back at him.
How we laughed. Roll forward - sorry - swim forward two holes to the 10th, and there's Fin, behind trees. And sure enough, one good swing of the club later and he's leaping sideways as the ball clatters into his trolley. He wasn't best pleased when I pointed out that hitting his own bag incurred a penalty.
Still, he had the last laugh as he picked up three skins on the 14th green - our last hole - making seven skins in all. By that stage the rain was coming down for the night, and there's nothing more miserable than bending over a shot and having water trickle down the back of your neck. We walked in, heads bowed.
No money was exchanged in the bar, as we all agreed (except Fin) that it wasn't worth paying over 14 cent. Fin, in his fury, slapped his credit card down and paid for the drinks and our meal. Unfortunately the kitchen was closed, so we feasted on Pringles and peanuts.
Perhaps it's one of the great levellers - you can play rubbish, get soaked and get beaten, but once you're in the bar, everything's right with the world and you're all friends. That's my kind of game.
Posted by Kevin Markham at 8:29 AM