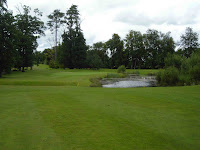 [Photo: green on the par five 8th]
It wasn’t the brightest thing I’d ever done. I had to get from Greystones to Gowran Park, in Co. Kilkenny, for a 2.10 tee time. Two and a half hours was plenty of time I decided, and thought that I’d go over the Wicklow Gap for a leisurely, scenic drive.But I had forgotten that it was the August Bank Holiday weekend, and it was a Sunday, which meant weekend drivers, tourists and mad motorbikers. I encountered all three as I headed up through Laragh, towards Glendalough and then up over the gap itself (and the setting for the fortress in Matthew McConaughey’s film Reign of Fire) towards Hollywood. Nightmare: the weekend drivers had granny in the back complaining about the bumps if the vehicle went over 25mph; the tourists slowed down and stopped without any warning to look at a passing leaf, and bikers felt no bend was too dangerous to overtake on – usually at 60mph. 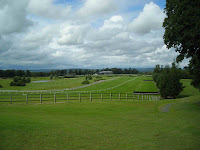 [Photo: views across the Gowran Park racetrack. The 7th hole is on the right of the trees, the 17th is inside the track itself]

And then there were the drivers who just wouldn’t get over. I’d flash them, gesticulate wildly, hoot at them and I even rammed a couple, but they remained immune to my diplomacy. So it was no surprise that I arrived late for the Scratch Cup. Fortunately there was a 30 minute free slot behind us, so it made no difference. In which case I am issuing a general apology to all the motorists who I abused along the road.

Mark, one of the lads from the golf forum on www.boards.ie, had arranged two tee times, and I was paired with my old playing partner Neville, who, if you read my earlier Barton Cup post, has moved from Greystones Golf Club to Gowran Park and was on the winning semi-final team over his old club. That was on Saturday; this was the next day, Sunday. The fact that I was a Greystones golfer in their midst didn’t exactly go unnoticed, but since Gowran Park had won, I was spared too much abuse. The other member of our three-ball was Niall, another victor from the previous day. Neville was looking in good form (he’s been to a Barton Cup final before), but Niall, who had never got this far, was looking the worse for wear. Several of the team hadn’t stopped celebrating until 5am, and Niall was one of them. You could have bottled the alcohol coming out of his pores and started your own distillery. Still, here he was, hitting the ball a mile. 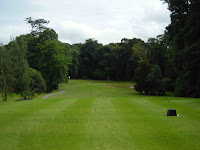 [Photo: the par three 5th - please note the position of the trees on the right of the tee box]

For two 4 handicappers and a 7, the standard of golf was not exactly high, and when Niall – to be blunt – shanked his tee shot on the par three 5th, sending it straight up into the trees, he looked remarkably indifferent. On the par four 7th he dumped his third shot into the water and then three putted from ten feet. His comment? “It’s so bad I don’t even have the energy to get angry.” I put my ball in the water on the par five 8th, so I empathised completely. It was that kind of day. And Neville, who had played ‘ricochet’ in the trees on the 7th, wasn’t doing a whole lot better – our combined score on the hole was seven over.

The guys made good pars on the par three 10th, and superb par-saves on the 11th, and it looked like things were getting back on track. Unfortunately we then arrived at the par five 12th – Index 1 – with a drive straight into the wind. Niall pulled his left and Neville pushed his right. Neville’s was plugged in the water hazard and, having decided to play it, he then buried the ball to the point he had no choice but to play a drop. At that point we went to help Niall, and found his ball out of bounds. He looked at his bag, he looked at the green and then back at the tee, and then he looked at his watch. “I don’t think so,” he said. 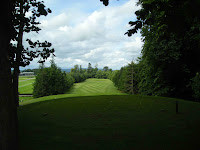 Neville returned to his ball, aimed over the water and boned it onto the small and unreachable island. He dropped another and knocked it over the trees, into the field, and out of bounds. He was now playing his eighth shot with 300 yards to go.

A while later, back in the bar, which is on the top floor and offers great views over the countryside, we had coffee and scones. Niall, who at 30 is the youngest vice-captain I’ve ever heard of, was telling me about a big membership deal that they’ll be introducing shortly. Gowran Park may only be eight years old, but it is a superbly entertaining round of golf, and I hope they get many more members on the back of the offer - it's a great golfing experience. He winced in pain as he was telling us this and it was at this point that I remembered why I so enjoy playing golf with Neville: he’s a physio. He hopped off his bar stool, had a good poke around in Niall’s back and made his diagnosis. I was expecting a recommendation of more alcohol, but it was just ibuprofen.

As we left, the two guys were laughing about what I was going to say on my blog, and I assured them that I would never tell anyone that we gave up and walked in after the disasters of the 12th. And I won’t.

Little known fact: The 16th is a long and very tricky par three that hits over the racetrack. Mount Leinster sits directly behind the hole and if you’re paying attention you’ll notice that the mounding at the back of the green is shaped to mirror the mountain backdrop exactly.

Posted by Kevin Markham at 3:03 PM