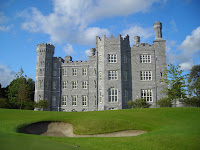 For anyone who hasn’t read my blog, Killeen Castle and I have been having a bit of a head-to-head for the last twelve months or so. I wanted to play and review it for my book; they didn’t want to know. I won’t go into the whole saga again, but when my dad’s birthday came up I thought I’d take him somewhere he’s never been. And, at the same time, I’d get to play one of the two courses I haven’t played in Ireland, as well as doing it under the radar. OK, so I had to pay (having not paid anywhere else), but let’s not quibble.

If you want to cut past the tale of the trip, you’ll find my course REVIEW on a separate blog.

Along with Chris, a friend of ours, we headed off on August 24th. We made good time and ended up pulling into the club well over an hour ahead of our tee time. The first thing we encountered was a security barrier. They must get lots of trouble out here, I thought, seeing as they’re miles away from anywhere. I wound down the window as a man, ably assisted by a clipboard, walked towards us. It looked serious. “Names.” I obliged, for all of us. He peered in and found Chris in the back seat, under golf clubs, bags and trolleys. He wrote some notes on the clipboard, and then introduced himself as Sean.

“We have one rule here at Killeen Castle,” he said, poker-faced. “No slicing, no hooking and no losing balls.” Stop it, Sean, you’re killing me.

It turns out the barrier is one of those 1970s movie barriers, made out of plywood. He walks over and pushes it at one end, and up it swings.

[Photo: the dogleg 17th whips around the water]

We’re met by John from ‘Golf Services’ at the clubhouse, and he takes our clubs, directing us into the pro shop to pay our dues. From there we head to the restaurant for a quick bite. Soup and sandwiches was the extent of the menu on what looked like a quiet day. John had said there could be 240 golfers on the course and you’d think you had the place to yourself. Hmm, sure, I thought.

The food arrived and it was seriously large. Tina said she’d wrap anything we didn’t eat so we could take it onto the course. It was evident that this happened a lot, but not this time. Chris and Dad finished their club sandwiches with ease. Just as well at the prices we were charged. €56 for three soup and sandwiches, a coke and a glass of beer goes into my ‘over the top’ category. But it was good at least. 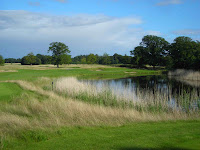 From the clubhouse window we could see flashes of three or four different holes (1, 2, 17 and 18 as it turned out) and it began to build that big occasion expectation. I love the experience at Mount Juliet, Jack Nicklaus’ other Irish course, and it was all going the same way here.

Outside the clubhouse, John was waiting with our bags. We were offered tees/pencils/pitch repairers, so we filled our pockets, bags and baseball caps – as you do. Then he said ‘follow me’, and off he zipped in his buggy, down the path and to the first tee. He gave us a quick pep talk about the dos and don’ts, and where facilities were located around the course. Loos were at 7, 10 and 14. There were also phones in case we needed anything. That made me laugh. ‘Hi, can I get a cream cheese bagel to go.’ The irony of it would hit me only later.

And off we went. The course is beautiful. It is sheer elegance and everything has been done to make you think these thoughts time and again. At times it’s like you’re flowing along on carpet. The castle is also on view on several occasions, which just adds to the whole thing.

[Photo: back up the 1st to the castle]

There’s a story that when Jack came back to do his ‘snag list’ on the course, every time he waved his arms at something, it cost €20,000. And he waved his arms a lot. Some say to the tune of €20 million. Well, you can easily believe it when you see what’s been done here. The place had been ‘chosen’ to host the Solheim Cup in 2011, even before it had opened and there’s a distinct feel that hole design has incorporated spectator viewing needs. Not that there’d be a problem with that. The estate is vast, and John’s earlier comment about not seeing other golfers was bang on the money. Oceans of space.

There are four lots of tees. The Black tees measure in at 7677 yards, Blues at 7142, Whites at 6535 and Greens at 6118. What completely different experiences, especially on the par threes and fives. On 7 and 12, two par fives, I reached the green in two. From the whites they were just 460 yards. But the bunkers are the same wherever you go. Deep and treacherous. Dad found himself in one on the par three 6th and it had no intention of letting him out. He hit half a dozen good shots that kept hitting the lip eight feet above him. Take this as my warning to stay well clear of them. 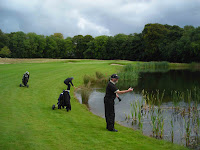 Our golf varied considerably, from good to bad to ugly. Several balls ended up in water and there was always a sense of dread when a shot started heading for a bunker. On more than one occasion we played out of one only to land in another.

I’ve been having a bad run recently. My memory isn’t what it used to be. In my last three rounds of golf I have left four golf clubs behind me on greens. Fortunately my playing partners know I’m a ditz and keep an eye out. Brian came to my rescue three times on Saturday, but unfortunately he wasn’t with us on Monday. So, when I reached the 13th green I noticed that my waterproof jacket had decided to find an alternative route back to the clubhouse. At least the rain had long gone and we were going to finish in glorious sunshine.

So, when we left the 14th green, I walked to the ‘facilities’ building, picked up the phone and called the clubhouse. And when we walked off 18, John was there to ask where I thought I’d lost it. I told him and off he went in his buggy. He found it and brought it back – a big thank you to John. Sometimes I think the pampering service you get at big courses is overdone, but there are definitely upsides. 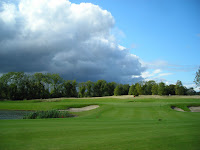 [Photo: approach to the 7th green]

Another of the upsides is the changing facilities. All plush and every need catered for. Sweets in a bowl too (didn’t last long, mind you). But I did get frustrated by the showers: three dials, all different shapes and no indicators as to what they were, and different shower heads to choose from. Clearly I needed a degree in plumbing, or at least a ‘Showers for Dummies’. Turn one and the rose shower head gushed water. Keep turning it and the jets at the side squirted out water as well. Turn another knob and the side jets stopped but the regular shower head burst into life. Now then, which one is the temperature control? Dear friends, I was going to take my camera and take a photo of this masterpiece of engineering, for your delectation, but I feared a naked man in the shower with a camera might raise suspicions in this day and age.

It will cost you in the region of €100 to play here. I would suggest you find out what all the fuss is about.

Posted by Kevin Markham at 9:03 AM