Carlow GC is rightly regarded as one of the great inland courses of Ireland. It is old (established in 1899) and it is one of the untouched masterpieces – perhaps the last one. Nearby Mount Juliet is the complete opposite in terms of its evolution and I would recommend that you play both courses close together – it will tell you a lot about what kind of parkland golf you like. While Mount Juliet is a manufactured, relatively relaxed golfing adventure, Carlow is a natural beauty that can squash you in a heartbeat. Take the 2nd hole, for example: at just 270 metres (visitors tee) it should be a simple hole, but my two playing partners stepped onto the tees with irons. There are other short holes, but none is easy, and the long holes are brutish for most amateurs. The 7th is a dogleg of 400 metres over a serious rollercoaster fairway, with the green up high and no sign of the putting surface. 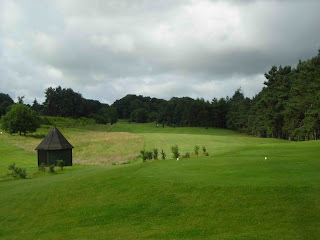 [Photo: The brutal par four 7th, Index 1. Rob made par on both visits]
On Sunday July 5th, the Junior Scratch Cup was
played off the back sticks. It made a difficult course that much harder. Mind you, at €25 for 36 holes of golf AND a meal voucher (a very nice lasagne and chips, thank you) no one was complaining – even when the rain started. On the same day, Woodbrook had their Scratch Cup and were charging €50. No contest for where I wanted to be.
I say in several reviews how a golf course ‘flows over the landscape’; nowhere is that more true than Carlow. It is a great experience and my playing partners would certai
nly have woken up on Monday morning with a smile on their face. Jamie Bolger, Carlow GC, is 16 and plays off 5 (he was 9 last year, so his coach must be doing something right. And that’s his dad, Jimmy Bolger, who’s the Pro at Kilkenny); Rob Fitzpatrick, Dunmurry Springs, is in his 30s and plays off 6. Jamie came 3rd and Rob came 6th. I can guarantee you that neither felt they were in with a shout walking off the 36th hole – even though Jamie had just sunk a birdie putt on the par 5 18th – it was the only birdie of the day, for all of us. Not that there weren’t opportunities – the putts just weren’t dropping. 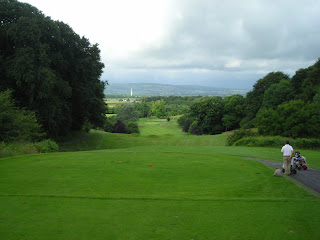 [Photo: Rob contemplates the renowned par four 8th - all down hill and glorious]
Jamie’s performance was an interesting one. His score on the front 9 was identical on both rounds – with two bogeys on the same holes (7 and 9). It was the back 9 that made the difference. In round one, on the short 10th, he dunked his approach shot into the water and walked away with a double bogey. It rattled him and he finished nine over on the back 9 – for a total of 81 (11 over). It didn’t help that the three guys in front of us were very slow and held us up every hole. They finally let us through – on the 18th green!! It was a four hour 20 minute round.
In the afternoon, assuming we were all out of the running, and escaping the clubhouse before the slow threeball, we raced around and the golf was far more relaxed. As we headed up the 16th fairway we saw the three guys behind us walking to the 13th tee. And no, they didn’t let anybody through. So, Jamie played much better golf, and his birdie on 18 brought him back to his handicap. None of us thought he’d be in with a shout, and Rob blew his chances with a triple bogey seven on the 16th. It’s Index 2, 401 metres, and he got stuffed in trees. He then lost his 3rd shot (in the gorse - left of fairway in the photo) and hit a provisional 180 metres uphill, to three feet (so he was there in five). He decided to look for his first, found it, and made a hash of things to walk off with a seven. And he came 6th.
[Photo: The par four Index 2 16th] 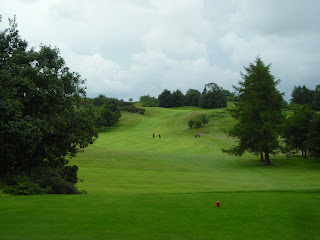 I admired Rob greatly – no matter what went wrong he remained 100% calm. Not one tiny bit of annoyance. That triple bogey would have killed me, and after Jamie put his ball in the water early on he went into a funk for a few holes – it undoubtedly cost him 2nd place. It’s easier said than done, I know, but Tiger’s ‘ten pace’ rule is the only way to succeed in golf. Whatever goes wrong you have to brush it off quickly. Me? I’ll miss a putt from three feet and let it fester for the rest of the round. It’s a curse that many golfers carry, and if that includes you, I suggest Bob Rotella’s book: golf is not a game of perfect. At least it will keep you off the course for an extra couple of days.
Carlow is one of the great adventures of Irish golf – perhaps that’s why Johnny Vaughan, the English broadcaster/DJ/entertainer, calls it the best course in the world.
Posted by Kevin Markham at 10:34 AM