One of the stories I tell about my travels is how I played with two Hackers at Ballykisteen - you know the kind - the ones who don't replace divots, who think that they land on a green from long range so rarely that they don't need to repair the pitchmark, the ones who'll start talking in the middle of your swing...
So, there we were on the par five 18th, and Hacker 1 duffs his
drive into impenetrable rough a couple of yards off the tee. Gone. At this point in my story, I ask people how he took his second ball and still got a birdie. The rational answer would be that he hits his second drive and then holes the next shot (an albatross, but for the lost ball). Nope. This guy drives it down the middle and then bones his second shot so it stays 12 inches off the ground the entire way up the fairway. Up ahead, in the middle of the fairway, a crow is pecking away merrily, minding its own business. The ball is heading directly for it, the crow looks up and whack! right between the eyes. The crow does a fancy little pirouette and then falls over stone dead.
We walk up the fairway, stand around the corpse and mutter a quiet prayer before moving on.
So, as part of promoting this book, I sent an email to the editor of the main golf magazine in Denmark, with this little story attached. He wrote back and said he didn't believe me.
Why?
Because he misread the word 'crow' as... 'cow'. Now that would be some shot! 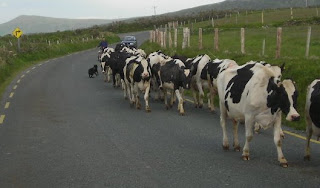 Posted by Kevin Markham at 8:41 PM