Miracles at Belmullet - Carnage and Celebration at Carne, Part 2

Here is Part 2 of Mike Considine's Carne story (You can read Part 1, here).


But then, in a moment, as often occurs in golf, something happened.  Things changed.  It was a moment that would define the weekend. 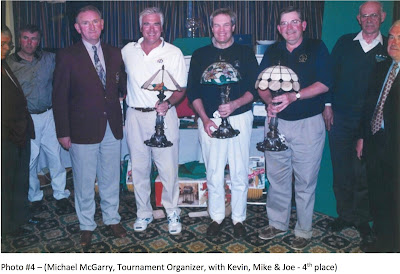 There were congratulations all around for our accomplishment, and more than that, as it turned out, we’d won a prize:  Barbecue grills for each!  Enormous barbecue grills, generously donated by a local sponsor.  We’d been expecting a shirt, or maybe some pro shop credit, but what would we do with these?   We could not possibly ship them home.  Seeing our predicament, Finian took matters into his own hands, approaching the third-place team with an offer to trade their Tiffany-style lamps, also donated by a local vendor, for our arguably more valuable and more utilitarian back yard grills.  They agreed, and soon we were posing, colorful lamps in hand, alongside Tournament Organizer Michael McGarry for our team photo.
The lamp I brought home remains one of my cherished golf mementos, prompting a grin every time I turn it on.  Our team photo sits proudly in my office.
As the tournament came to an end, the four of us watched as the Irish PGA representative stood with the winning pros for final photos.  Tradition had it that winning pros would wear sport coats for the occasion, but the only sport coat on hand was size 48.  As one player commented on the photo op:  "The coat will look great when he grows into it." 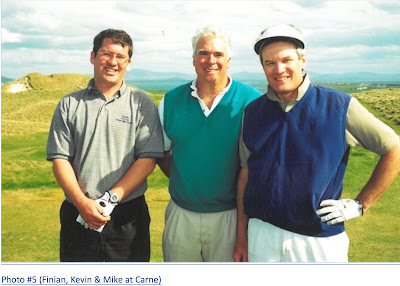 Finian and his merry band of Americans celebrated that night, again way too much and way too late.  Into the wee hours, it was the Westie and Finn Show Redux.   We discussed the golf swing, and all other topics of interest: politics, religion, South Africa, the burgeoning Celtic Tiger, Wayne's love of flying, Finian's love of fast cars. And once again, we retired at 4AM, too tired to imagine an alarm clock being set, or even awakening before noon. Golf was the furthest thing from our minds.
But wait, we wondered before turning in.   Had Wayne and Finian actually promised us a golf lesson at the Carne clubhouse the next morning at 8AM?  Were they joking?  Of course they were joking.  There was no way they were going to wake up early tomorrow to give us a lesson.  Yet we thought they had said it, and the Irish law firm could not bear the thought of standing Wayne or Finian up the next morning if they were serious.
One more miracle at Belmullet.  We got up shaking our heads, openly questioning if we were daft.   We drove to the course, arriving a few minutes before 8AM.  Neither Finian nor Wayne nor anyone else was in attendance. It was an overcast morning, chilly and softly raining.  Foggy, like our minds.  Ten minutes passed.  We were alone, and it served us right -- we had dipped our toes into the cauldron of dipsomania, and it had scalded us.  We were either drunk or delusional in believing any sane person would show up after such a night of revelry and craic.  And frankly, it was not a problem.  We had enjoyed an extraordinary weekend.

But wait -- a faint sound in the distance.  A vehicle.  The vague outline of a sports car appeared on Carne's winding entry road.  Could it be?
It was. A final lesson in the mist at Carne. Inner golf.  Gravity was our friend—as were our Celbridge teachers.
“Just hit the ball.”
Useful advice, in golf and in life.
Thank you, Finn and Westie.

Posted by Kevin Markham at 3:01 PM