Miracles at Belmullet - Carnage and Celebration at Carne

As the Atlantic Coast Challenge draws near (9-11 July) it's time to post a wonderful tale of golf that was emailed to me by American, Mike Considine. Mike has some special memories of playing in Ireland and playing at Carne in particular. As you'll deduce from the opening sentence, Mike and his friends met the South African golfer, Wayne Westner, in Belmullet. Here is Part 1:
The recent passing of the South African golfer Wayne Westner prompted a search of dusty boxes containing materials from old Irish golf tours.  I was looking for a particular file.  The year was 2000, and, in our new springtime tradition, I and a few college friends were preparing for a golfing trip to Ireland, the Green Isle.  Unlike many links purists, we had not included Scotland on our itinerary.  Scotland was never our focus.  With a nod perhaps to our Irish heritage, our group's links lust centered on the courses introduced to the world by the siren call of Herbert Warren Wind in Sports Illustrated, and the stirring prose of Irish writer Dermot Gilleece. Ballybunion, Lahinch, Waterville and regal Royal County Down -- these were the courses that lit our imagination.  My very first round of Irish golf had been at Ballybunion Old in 1987, where I was greeted in the unassuming clubhouse by a friendly dog, and escorted around the course by an affable caddy named Eric Glasper.  The modest old clubhouse, now replaced by an imposing edifice, featured a large wall
photo of Tom Watson.  The day was memorable for its bipolar weather -- sunny and calm on the front nine; heavy rain and gale force winds on the back.  The round demanded my utmost concentration and stamina to complete a score for 18 holes and return unscathed to the clubhouse. Just magnificent.  My scorecard mirrored the elements:  37-62=99.  One stroke short of the century mark.  A test of body and soul, complete with my one-handed save of the slightly-built Eric, who was almost blown off the cliff beside the 11th hole by a powerful gust.  I was hooked. 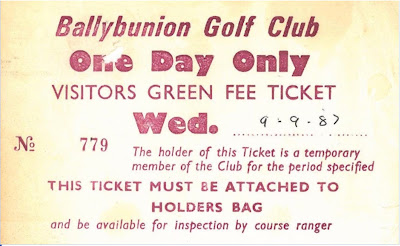 But I digress.
I was looking for a file from thirteen years later, the spring of 2000.  We rookie linksters were now enthralled by a new book on Irish golf entitled "Links of Heaven," a ground-breaking survey of links courses located in Ireland.  In our opinion, authors Richard Phinney and Scott Whitley had hit a revelatory home run with this 1996 book, in its reviews and historical accounts of exceptional Irish links.  In particular, the book highlighted the many intriguing "hidden gems" scattered throughout the land.  Links of Heaven had become our new bible and guide.  Narin and Portnoo with bovine tenants?  Cruit Island with scenic views to match those of Pebble Beach?  Rosapenna where the ol' Tom Morris used to roam?  Phinney and Whitley had unwittingly prescribed a lifelong adult adventure for us.  We were inspired to visit every course -- and who knows?  Maybe we ourselves might discover and proclaim a new hidden gem along the way. And if Guinness accompanied us, so be it.  To our minds, Guinness, "Vitamin G", was the perfect beer – full of unheralded antioxidants, and available fuel for post-round conviviality.   Our swings and our egos occasionally needed lubrication, and Guinness was the libational glue that kept us together and smoothed our ride through Ireland.
As is the case with most American golfers, our initial forays to Eire had focused on the spectacular Southwest, where the well-known war horse courses fit the bill for exceptional tests of links golf.  Throughout the 1990’s, we played them all, from the legendary Lahinch, Ballybunion, Tralee and Waterville, to the lesser-known but no less enjoyable Ceann Sibeal, Dooks, and Castlegregory.  Our itch now scratched, we began to wonder, what was this rumored “wild west” coast, the Great Northwest, described so alluringly by Phinney and Whitley?  Golf in Southwest Ireland was being discovered by the rest of the world, and we needed new territory, a new challenge, a new chance to discover our own hidden gems.
A fairly new course in County Mayo along the west coast of Ireland captured our attention, and landed on the itinerary for our trip in 2000.  Its name:  Carne. In this pre-email, pre-cell phone era, we were booking tee times and hotels by phone and letter and occasionally by fax.  Organizing a tour, complete with hotels or B&B's, potential restaurants/pubs, rental van, and the all-important road mappings became our perennial winter project. We loved the challenge and soon became adept at selecting a tour of courses in a defined geographical area. Each tour took on a life of its own -- and its own name.  The tour of 2000 was soon labeled "Easy Eire," after our effort to limit the amount of driving along the area’s narrow and dangerously winding roads.  The history of Carne Golf Club makes for fascinating reading as depicted by Phinney and Whitley.  Carne was the unlikely culmination of a multi-year effort to develop a golf course over commonage land in one of the most remote regions of Ireland.  The design by the venerable Eddie Hackett was his final work, and produced the “Miracle of Belmullet.”
Easy Eire 2000 did not have an easy beginning, however.  One member of our usual foursome had to withdraw due to medical reasons.  And our request to Carne for tee times had initially been met with a polite denial by manageress Evelyn Keane due to a conflict with an Irish Pro-Am Tournament scheduled to be played May 13-14.  Undaunted, we journeyed forward as a threesome:  Kevin Haggerty, Joe Corkery, and I (or, as we called ourselves, the Irish law firm of Haggerty, Corkery & Considine), playing early rounds at Enniscrone, and tentatively booking Westport and Connemara in case our plans to play Carne did not pan out.  But as Irish luck would have it, we arrived at Carne on May 12th to learn that an amateur team had dropped out, leaving room for the Irish law firm to participate in the tournament.  Play in an Irish Pro-Am?  Are you kidding me?  Time to get serious. 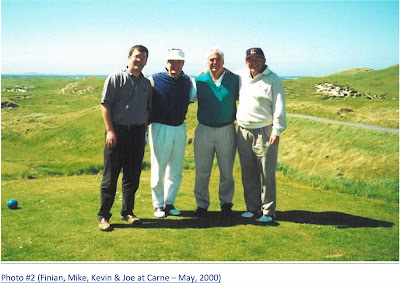 We played a practice round on Friday and, truth be told, we hardly distinguished ourselves.  The fairways were tight, the greens were rocky firm, and our games, in a word, were infirm. This was difficult challenging golf. We did not recall encountering such brutal conditions on our previous tours.  "Ballybunion on steroids" was how Phinney and Whitley had described Carne, and our gurus were, as usual, spot on.  Even the winds seemed unnaturally stiff and cold and uncompromising.  High dunes lined the fairways; pesky mounds were everywhere; and the steroidal gales were constant. These were a harbinger that we were not going to tally many routine greens in regulation during tournament weekend.  Saturday morning, Kevin, Joe and I met the professional who was to be our guide both and off the course for two days and, I might add, for two nights.
Finian Dwyer, a teaching pro out of Celbridge near Dublin, graciously greeted us and made us feel welcome in the rarefied environment of a Pro-Am golf tournament.  None of us three Americans had ever played in a Pro-Am before, so it was startling to hear our names and our affiliated clubs in America announced at the first tee.  A hush prevailed over the crowd of onlookers for the opening shots of every foursome.  Finian crushed his initial drive over 300 yards, and we were off.  The rest of us stayed quiet during the first few holes, trying to follow golf etiquette while not disturbing Finian's concentration.  At the same time, we were trying hard to contribute respectable scores in the 3-ball team stableford format.  Finian’s performance was a sight to behold -- booming drives, striking accurate irons, and combining both with a splendid short game.  His ball seemed oblivious to the wind.  He went one-under on his own ball after five holes in difficult conditions. We were dazzled.  I recall remarking to Kevin early in the round that we were indeed fortunate to have drawn such a formidable pro partner as Finian.
But then, in a moment, as often occurs in golf, something happened.  Things changed.  It was a moment that would define the weekend.
Part 2 is here.