There are several events going on at Irish golf clubs in the next month or two, and new figures show the ups and downs of Irish tourism and Irish golf.

When you have a superstar like Shane Lowry as your golden boy, why wouldn’t you take advantage? Esker Hills are running a four day
competition during the Masters. Separate singles competitions will be held on each day (7, 8, 9 and 10 April) with prizes supplied by Shane himself – expect signed stuff like golf bags. There are nearest the pin competitions on all the par threes for an added splash of fun.

And it’s only €30 to enter… including lunch. Pick your day and experience one of the most adventurous courses around. For tee times call 057 9355 999. 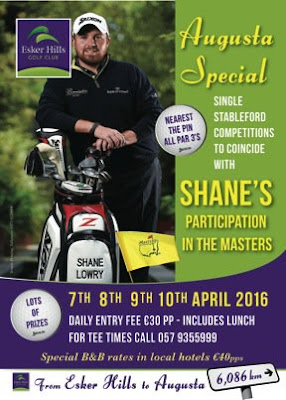 New Forest is one club that continues to slip beneath the radar of many golfers. A crying shame, that! Opened in 2006 as a sister property to Moyvalley, this is a more classic parkland style and it is really rather special. The 18th century Manor House – now clubhouse – is a spectacular old building and now the club’s accommodation is up and running with 11 on-site villas and apartments available to rent. It’s worth pointing out that when New Forest first opened these properties had a price tag of €1m. Today’s new owners have taken a somewhat different approach making the accommodation available to everyone. It can be used for self catering if required and, at 800 sq feet, these are good size apartments.

This year the club will be adding a new 300 yard driving range and golf academy with a Trackman 4. It’s all positive news for the club and and yet green fees remain in the €30/€35 bracket, while membership is €740.

The current issue of Golf Monthly has a long travel article on Irish golf... where I get to talk about 12 of my favourite courses. Any guesses? 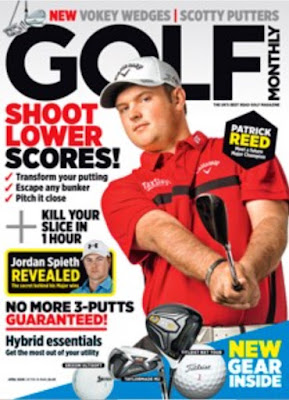 There was a good boost to tourism for the start of 2016, with some positive figures coming out of Failte Ireland today. Total overseas trips to Ireland for the period November 2015 to January 2016 were up by 18% on the previous November to December three month period:


There are no specific golf figures at this stage, but the strength of Sterling should continue to lure British golfers back to Ireland.

In contrast to the tourism figures and the economy’s improvement, the number of GUI affiliated golfers fell by a thousand last year. That decline has been continuing for eight years, when member numbers peaked at 177,000. Today, the total membership number is 130,000. So, 47,000 golfers have given up their membership, which equates to 26%.

On the plus side… many of those golfers have not given up playing, they’ve just chosen not to be a member of a club. They’ll pay green fees and, quite possibly, play just as often as they did when they were members but they no longer want to pay an annual sub. Or else they’ve forfeited the sport in favour of cycling, triathlons and don’t mind being seen in lycra.

2016 sees the 100th anniversary of Howth Golf Club… but there are three courses celebrating their 125th anniversary: Limerick, North West and Portsalon.

Maybe it’s time to pay one or all of them a visit. North West and Portsalon are on opposite sides of Lough Swilly. 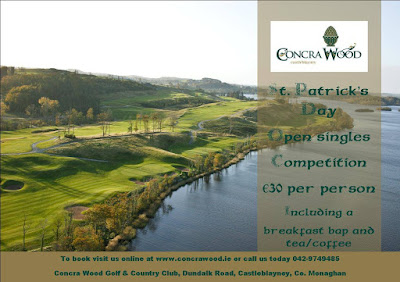 This Christy O’Connor (Jnr and Snr) masterpiece is hosting a Singles event on St Patrick’s Day, for a price of €30 including a breakfast bap. Call 042 9749 485 to book a tee time. It is well worth a trip!

There are a few things going on at Lough Erne in the next couple of months: 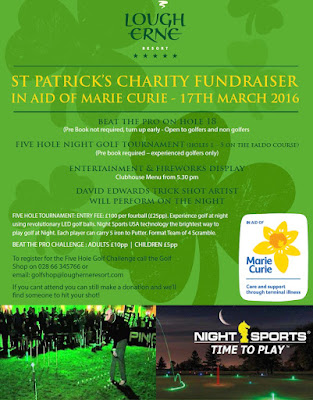 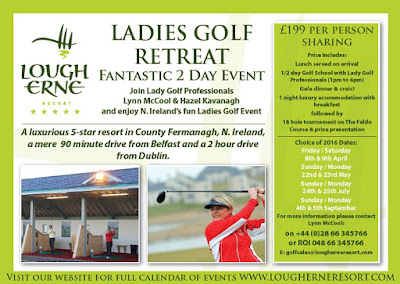 Irish golf is keeping busy and getting busier as Spring approaches - let's hope that rain buggers off for a while!

Posted by Kevin Markham at 9:12 AM