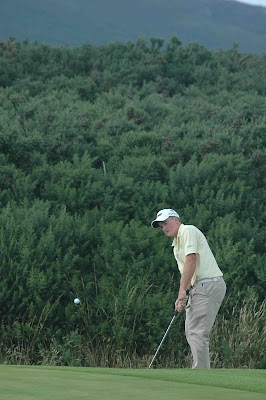 Congratulations to Irish golfer, Paul Dunne, who will once again be teeing it up with the world's best at The Open Championship at St. Andrews.

He played in The Open last year, too, at Royal Liverpool. He missed the cut by a couple of shots but was on the 'wrong' side of the draw, regarding the weather - only two players actually made the cut from that group: Adam Scott and Shane Lowry.

This year - and only a couple of days ago - he qualified for it at Woburn Golf Club... just as he did last year. And he won both times... by beating some of the biggest Pro names in European golf. Retief Goosen (who qualified in 3rd), Robert Rock (who Paul beat last year as well), Colin Montgomerie and Thorbjorn Olesen, to name a few.


His second round 65 meant he finished 3 shots clear of the field, on 9 under. It should also be mentioned that in Round 1, he bogeyed his first 2 holes.

His dad was on the bag and they've formed quite a partnership... going all the way back to his Barton Cup days at Greystones Golf Club. Everyone at Greystones Golf Club is rightly proud of this impressive and steadily improving young man. We hope he makes the Walker Cup team - if he makes the cut at The Open, I can't see how they can leave him off the team... and after that, he's certainly thinking of a Professional career.

And why wouldn't you!

For the full results from Woburn, click here.
For photos of the Woburn Marquess course (one of 3 at Woburn), click here.