As the momentum for the Northern Irish Open continues to build, it was great to get back to Galgorm Castle last week. I was there to take photographs and the course was having the final touches applied (although not the sponsor hoarding, thankfully) ahead of an event that is growing in stature.

Located outside Ballymena, Galgorm Castle is one of the most relaxing golf courses on the island. No doubt the rough will be longer and thicker for the visiting Pros, but Galgorm Castle was never designed as a tough course. We have plenty of those already, so why not create a golfing experience that puts amateur golfers at ease. Yes, the Pros will play its full length of 6,930 yards, but for you and me it is a far more manageable 6,629 (whites) or 6,088 (greens) yards.

Alternatively, head along to the Northern Irish Open (August 6 to 9), in Association with SPHERE Global and Ulster Bank, and watch the breed of professional golfers who are hoping to make it onto the senior tour, or at least make a living playing on this European Challenge Tour.
I was always intrigued by the quote that said that the only thing separating the top 100 golfers (tennis players etc) in the world was the three inches between their ears. How that applies to those trying to make it up the ladder is another question.

The Galgorm showpiece broke all attendance records for any European Challenge Tour event in the last two years, as over 34,000 spectators came through the gates in 2014 to witness Sweden’s Joakim Lagergren win the event and pick up the £20,000/€27,200 winner’s cheque.
Once again the NI Open will be free to enter. All you have to do is register online at niopen.co.uk to get your free tickets. The Open will be accompanied by a variety of stalls/events promoting all that is great about Northern Ireland – from the landscape and golf to the food and drink. 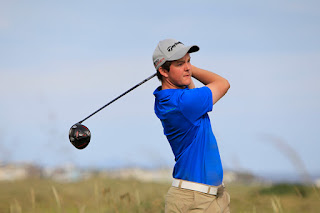 Amateur John-Ross Galbraith is the latest addition to compete in next week’s NI Open at Galgorm Castle before returning to Portrush, where he won the recent North of Ireland Championship, as Ireland defend the Home Internationals title. (Photo: GUI/Ulster Branch)

Five-time European Tour winner Michael Hoey remains the NI Open Tournament Ambassador for the third consecutive year. Head along and see if the event can produce a local hero.

Posted by Kevin Markham at 9:45 PM