Over the last year or so there have been five major rankings of Irish golf courses. These come from an Irish magazine and four UK golf media. The ranking comparisons are shown in the table below.

The top 30 courses according to Golf Digest Ireland (GDI) are in the left hand column - call these the benchmark as they're taken from the Top 100 Irish Golf courses. The remaining rankings are alongside, showing which Irish courses make the top 100 GB&I ranking. The overall GB&I ranking is then shown in brackets.

Of the five rankings, four list Royal County Down (RCD) at number one, with the other listing the Newcastle course at number two. That's consistency for you. Thereafter it all becomes very interesting with courses such as Rosapenna Sandy Hills (25th, 11th, 10th, 13th and 9th) and Tralee (7th, 18th, 11th, 8th, 16th) exhibiting the biggest swings, Ballyliffin (Old) being omitted from two lists, and The Island remaining firmly between 12th and 14th place. Don't forget that all the publications have different assessment criteria/panels.

It is no surprise that links predominate... especially as the fifth list (NCG) only deals with links courses. 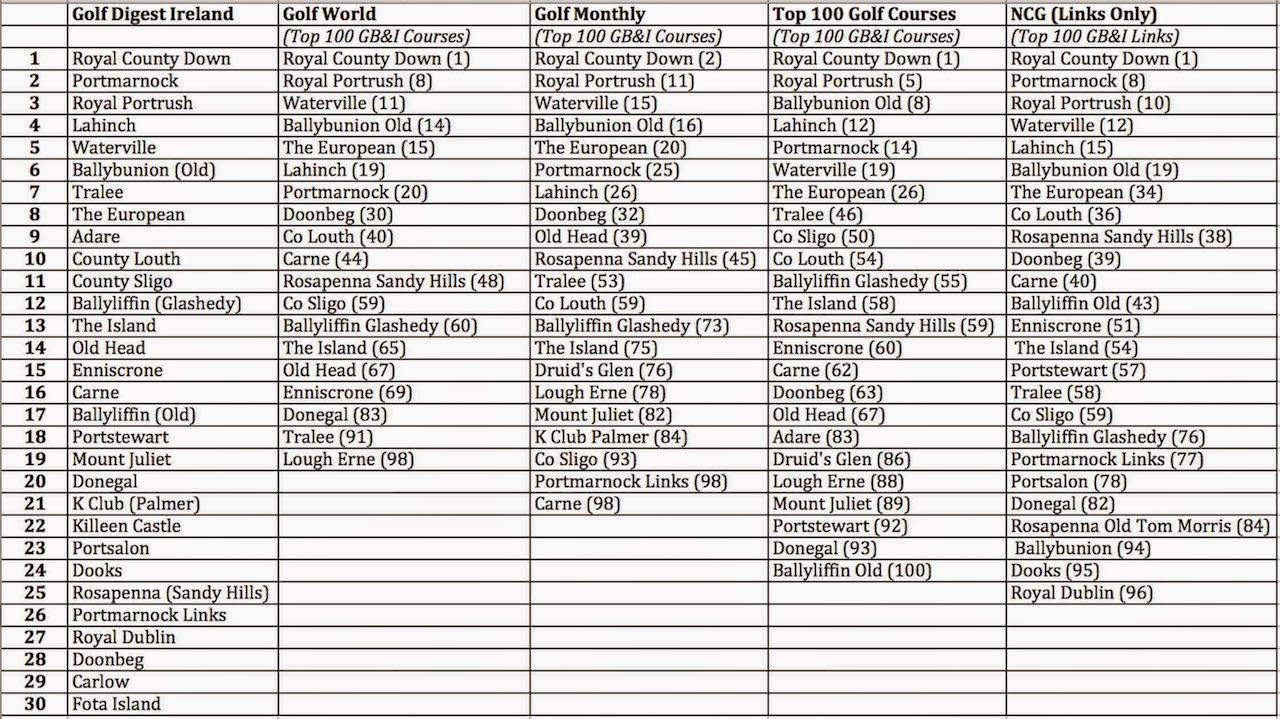 It's quite a juggling act to manoeuvre your way across the different rankings, but intriguing nonetheless. I could probably have thrown in Golf Digest's Top 100 list (courses outside the USA), which includes eight Irish courses... but I didn't have space! But yet again, Royal County Down takes top spot, with Portmarnock (12), Royal Portrush (13), Waterville (23), Ballybunion (26), Lahinch (41), Tralee (82), The European (88) also being included.

Rankings alway cause controversy and are rarely as useful as they first appear because golfers have different views on what makes a golf course great. Beauty is in the eye of the beholder after all, and between companions, performance, location, condition and weather, we can all make flash judgements about a course.

A friend once told me he had a horrible experience at Portsalon and would never go back. When pushed, he admitted that the drive to the course had been horrendous and he'd got lost twice... it had nothing to do with the rather excellent golf course.

My only recommendation is that you pick a couple you haven't played before and make yourself a promise to play them this year. How else will you be able to experience - and rank - Ireland's golf courses for yourself!

Here are my ten best Irish Golf photographs of the year... for a little added inspiration.

Posted by Kevin Markham at 1:34 PM