The New Book - Driving The Green 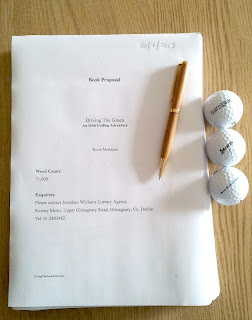 The manuscript has been sent, the deal has been struck and the contract has been signed. Come next Spring, my golfing travels will appear in a book entitled Driving The Green. It tells the story of the ups, downs and, more aptly, the side-to-sides of travelling around Ireland in a camper van. It takes a light-hearted view of Irish life, golf and golfers, and mixes it with history, Ireland's beauty, a suicidal old lady and a couple of Born Again Christians. Here's an extract, from a trip to Cork:


Old Head is probably Ireland’s most exclusive and dramatic resort, flowing over a headland that juts out into the Atlantic. From the restaurant looking out over the 18th to the ocean, to the changing rooms, to the Starter greeting you with a clutch of tees and markers in hand, you know these are moments to be cherished. I was certainly cherishing mine until the Starter stuck his hand through a hole in a rock, while looking at me expectantly.
“It’s the Rock of Accord,” he said by way of explanation.
Oh boy!
I shook hands and then reciprocated. No doubt the Americans love this flourish but me, not so much. I came to play golf not go fisting my way through a lump of stone.
Old Head don't allow trolleys on their velvet fairways, so I'd splashed out and got myself a caddie. He was standing beside me, watching as I performed this odd ritual, not saying a word.
But that didn't last long. Patrick was a talker. Once he’d established that I knew which end of the club to hold, he was away. Tall, skinny, in his 20s with a foppish mop of black hair that would have frightened Starsky, Patrick hailed from Pittsburgh.
“Yea,” he said as if we were in the middle of a conversation. “I came to Ireland on holiday last year. I fell in love and decided to stay.”

We were only approaching the 2nd tee, and we were discussing his love life already. That didn’t bode well. Fortunately, the view from the 2nd tee box is a conversation stopper. You come out of tall pampas grasses and you’re on a tee that sits above the cliffs. The roar of the ocean rises up to you and the fairway curves around the edge of the sheer drop to a green that looks like it might topple into the sea at any moment. It is breathtaking and my jaw hitting the ground brought Patrick back to earth.
He pointed out to sea, between the peninsula and the headlands that lay to the east. “The Lusitania sank over there, about 10 miles out, after it was torpedoed by a German submarine in 1915. Almost 1,200 people were lost.”
The loss of over 100 Americans on board was the catalyst that drew America into the First World War. It’s hard to believe that such a tragedy and such consequences could come from this peaceful, isolated place.
Patrick was reeling it off with a style and rhythm that suggested he had the story down pat and had been regurgitating it daily. At Old Head, caddies double as tour guides. Many of the visitors who play here are American, so local history always adds colour to the round and, perhaps, a different colour to the money they get tipped.
“How good are the guys you caddie for?” I asked.
He looked around carefully, judging how far the wind could carry his next words.
“Pretty crap. You’re the first decent golfer I’ve caddied for in weeks.” He elaborated, providing details of double-bagging (which is carrying two bags and not some unusual sexual practice), spending hours in the rough searching for balls that everyone knew had gone over the cliff, and trying to convince over-optimistic golfers that a 9 iron won’t get them to the green 200 yards away, even with a force 10 gale at their back.
“I had this couple a few days ago,” he continued. “Lovely people, but not golfers. She had never played in her life but she turned up with all the gear. Pink bag, pink clothes, pink shoes, pink grips. Even her balls were pink! And that’s not something you’ll hear me say again in this lifetime or the next.” He shook his head sadly. “Such a waste, but her husband took me to one side and told me to look after her – which I guess was his way of saying he wanted to focus on his own game.”
I saw his rationale.
“So I looked after her all day, was really positive and enthusiastic, gave her tips all the way round. It was a laugh, believe me, and she had a fab time. And it was worth it. At the end her husband was delighted and gave me the biggest tip I’ve ever had.”
I couldn’t resist. “How much?”

He wouldn’t tell me, other than to use the word ‘huge’. Shortly thereafter we were back to his love life.
The object of Patrick’s affection had not returned his amorous advances, or – to be less subtle – she’d dumped him once he started getting serious. The girl had seen it as a holiday romance; Patrick had seen it as a lifelong partnership. He was an intense young man, for sure, and by trying to convince me of his own self-worth it was evident that his intensity had been the cause of his self-destruction.
“But I won’t give up. I’ll win her back.” Each of his words was cut with angst.
The boy needed a good slap and a ‘wake up and smell the coffee’ speech, but mention of the coffee might induce a reverie about making her breakfast after a night of passion. No, I kept my mouth shut.


Driving The Green will be published by Collins Press in 2014.
Posted by Kevin Markham at 10:44 PM